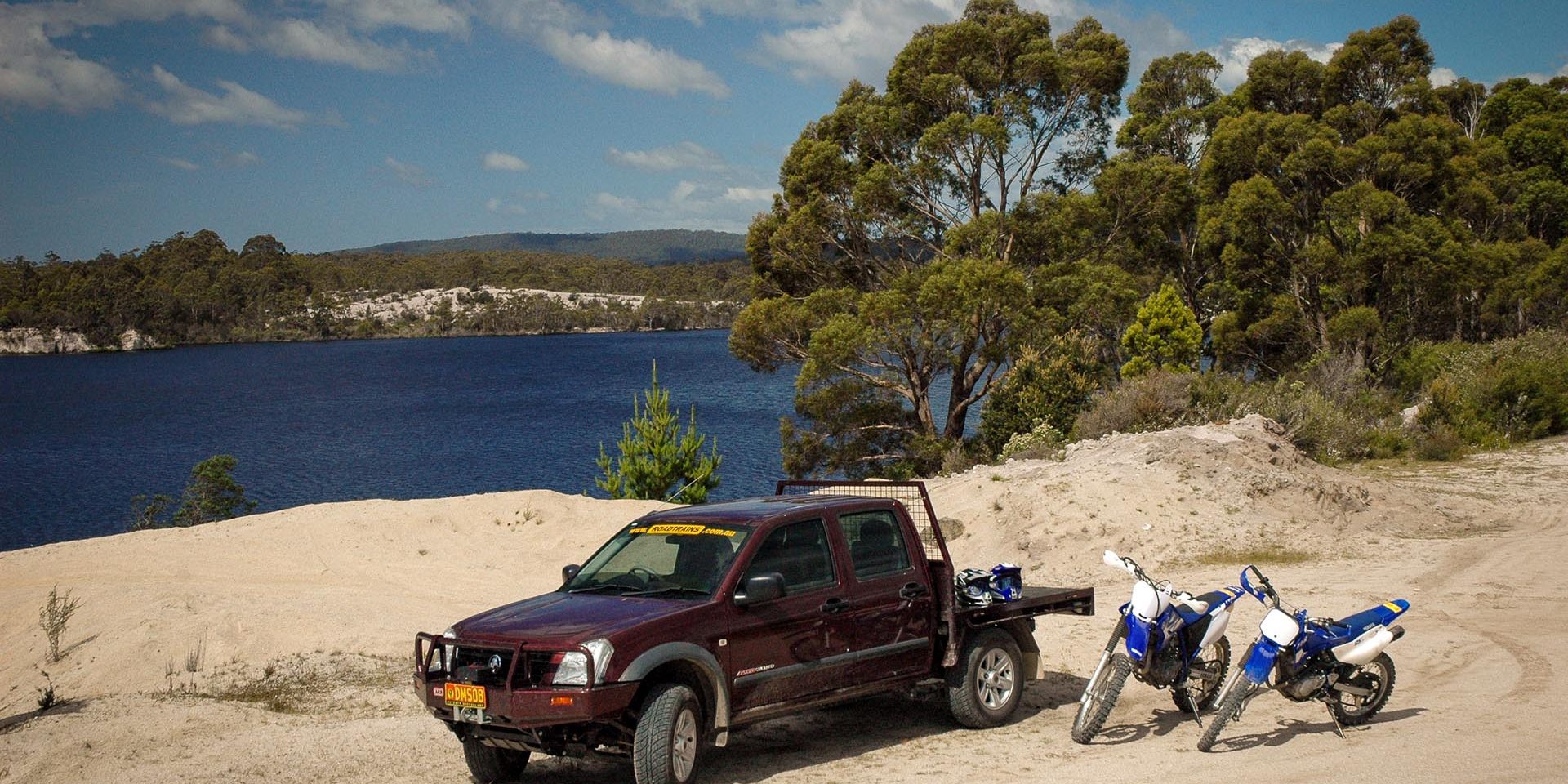 When you practically live and work out of a vehicle day in day out, you quickly learn all of its little idiosyncrasies. In other words, know them from top to bottom. Howard Shanks has done just that for well over a decade, so when he ordered another Holden Rodeo, we had to ask why? 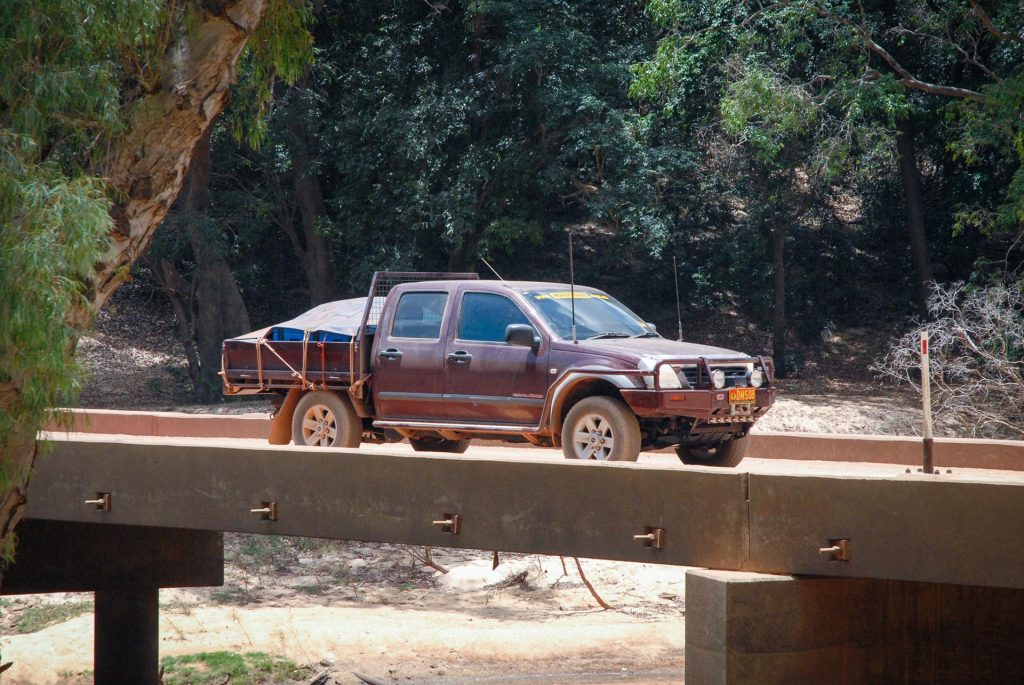 The bottom end of Australia is the most unlikely place to see the orange Queensland “Outback” number plates and bright reflective “Roadtrain” sign stretching across the top of the windscreen on the new RA Holden Rodeo of trucking documentary maker and roving heavy truck editor at large. However, getting around the remote areas of Australia is all part of this Rodeo’s job, and it’s here in northeast Tasmania where the Rodeo got a real workout on a firewood gathering exercise. The next assignment was up north, about as far north as you can go, Cape Yoke, in fact. So one might say a rather extensive test run from the bottom of Australia to the top.

It isn’t easy to single out any particular reason why I’m partial to the Rodeo. But instead, they have many outstanding features that stem from the ride and handling qualities to economy and reliability. The dual-cab version affords the flexibility of taking a crew of men, including a healthy load of equipment in the tray, to the job site. Then after work, there’s enough room to take the family and bikes out for a blast in the scrub; hence versatility rates very highly as well with this model.

This RA Rodeo runs much the same specs as my older 2002 Rodeo, even down to the paint colour, 3-litre turbo-inter-cooled diesel, five-speed transmission and of course, the transfer box that delivers the power to final drive with a 4.3:1 ratio. 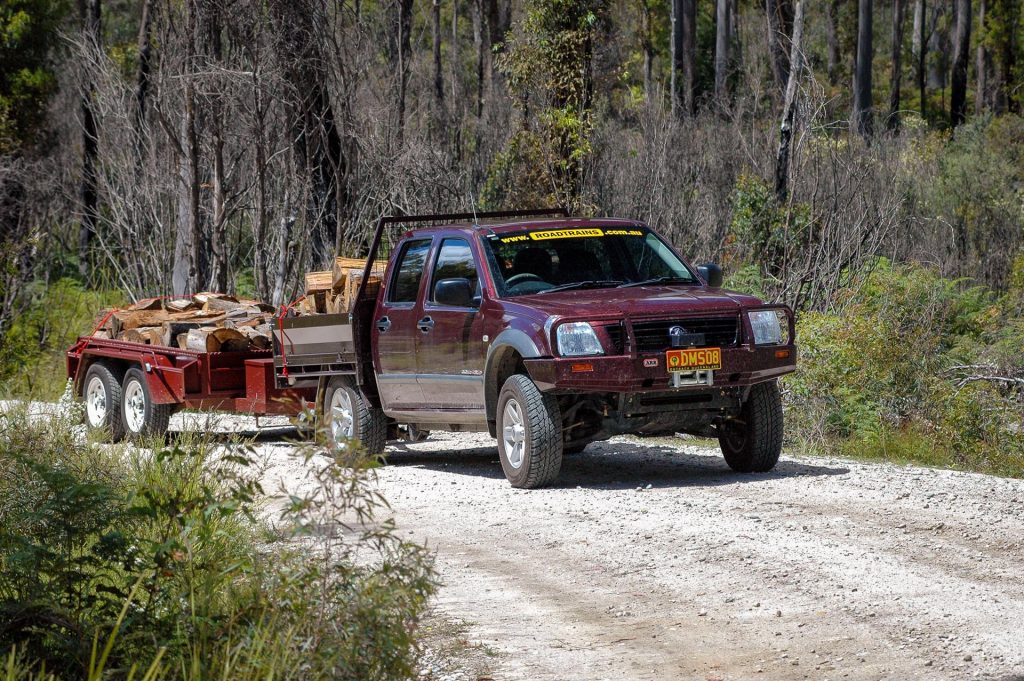 There are a few subtle changes, and the jury is still out on whether they are for the better or not. Most noticeable is the re-routing of the intercooler from the top of the engine to in-front of the radiator. In addition, EGR (Exhaust Gas Recirculation) is standard fitment to make the engine meet current emission standards. The result is that this RA Rodeo produces 280kW at 2000 RPM compared to the older 2002 Rodeo, which punched out 265 kW at 2000 RPM from the same displacement engine.

Not so noticeable is the ratio change in the transmission. The first gear on the 2005 RA Rodeo is 4.008:1 compared to 3.767:1 on the 2002 model. Needless to say, it leaves the lights a little quicker, which is handy enough when driving it like a “Toorak Tractor”, however where it really counts is out on the job, the 2005 RA Rodeo with the extra 15 kW pulls off the mark a lot easier with a fully loaded trailer, and when it comes to hill climbing off the beaten track, it just does it so much easier. For highway cruising overdrive on this RA Rodeo is 0.828:1 compared to 0.809:1 on the 2002 model. From a bum in the seat perspective, there is little difference between them, although compared to the automatic variant that has 0.694:1 in overdrive, where there is a noticeable difference on the tacho.

There are also many subtle differences in the cab. A few noticeable points are the additional room in width and more legroom in the rear. In addition, the absence of the short transfer case lever, replaced with dash-mounted buttons, affords more legroom on long trips.

The RA Rodeo is far more passenger car-like than previous models in terms of ride and handling. However, it took about 10,000 km to settle in and return anywhere near acceptable fuel economy figures. Because it is at the fuel bowser where the earlier diesel Rodeos certainly strutted their stuff, traditionally they’ve been very economical vehicles to run and when you consider the weight of the vehicle and the fact that it is a robust four-wheel drive. Nevertheless, when it returns fuel economy, that’s on par with a traditional family sedan. You can only smile quietly. But sadly, it is not the case with this RA Rodeo. The fuel economy is, in my opinion, shocking, roughly about 0.5Lit/100km more compared to the previous models. 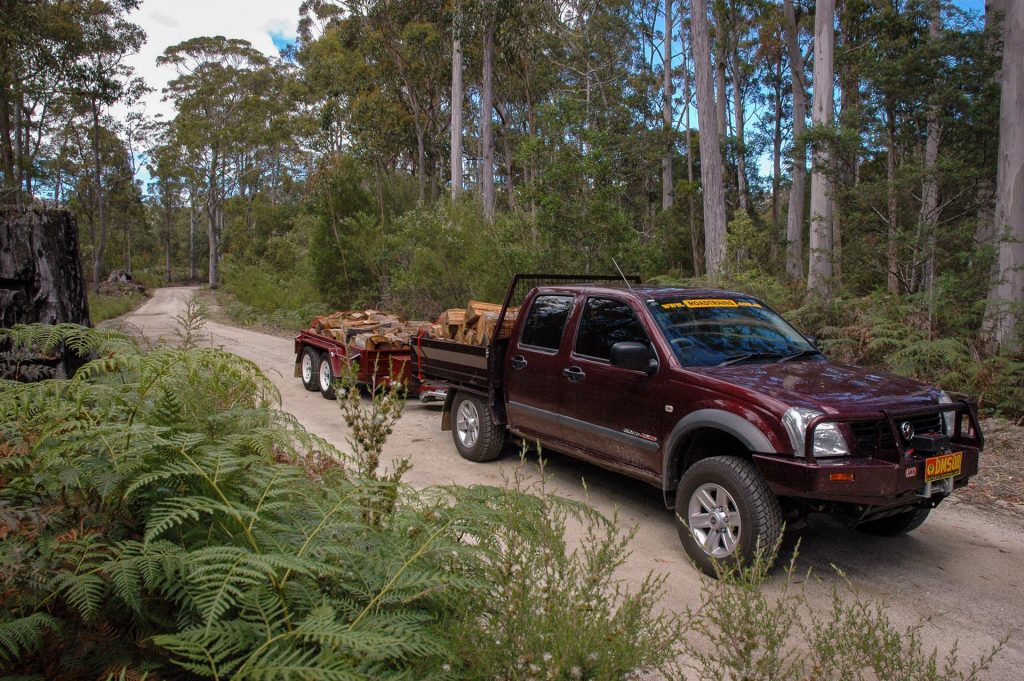 I’d found the factory fitted tub on the earlier models a little restrictive in terms of utilising space effectively. However, I was reluctant to install a traditional tray, as I was concerned that I’d end up with too much weight behind the rear axle. However, discovered this model included the release of the new cab-chassis crew-cab, which had an additional six inches or so in the wheelbase to suit a traditional tray.

Consequently, I organised a custom tray and Mark from LDK in Shepparton, Victoria, added several features, including removable rear posts. So now, when the rear tailboard gets removed, the two sides are still positively located at the rear. Alternatively, there is a clear steel floor when both sides get removed. Then we added a colour-coded ARB winch bar and a Warn XD9000 electric winch, and to finish it off, colour-coded side rails and steps arrived about six weeks later. Apparently, some sort of hold up with the paint shop caused the delay, so they told us.

Shortly after collecting the keys from the dealer, I wheeled the RA Rodeo around to the tyre store to exchange the standard rims for a set of ROH machined wheels to personalise it a little.

After 12 months, I’ve found a couple of things I don’t like about this model RA Rodeo. Firstly and importantly, there is so much hardware in front of the radiator, such as the intercooler and air-conditioner. If Australian history is any indication, most folks who buy this type of vehicle will fit a bullbar and driving lights. However, if you do this on this model RA Rodeo, especially after adding a winch, then there is not a lot of room for air to get through and cool everything, as it should. 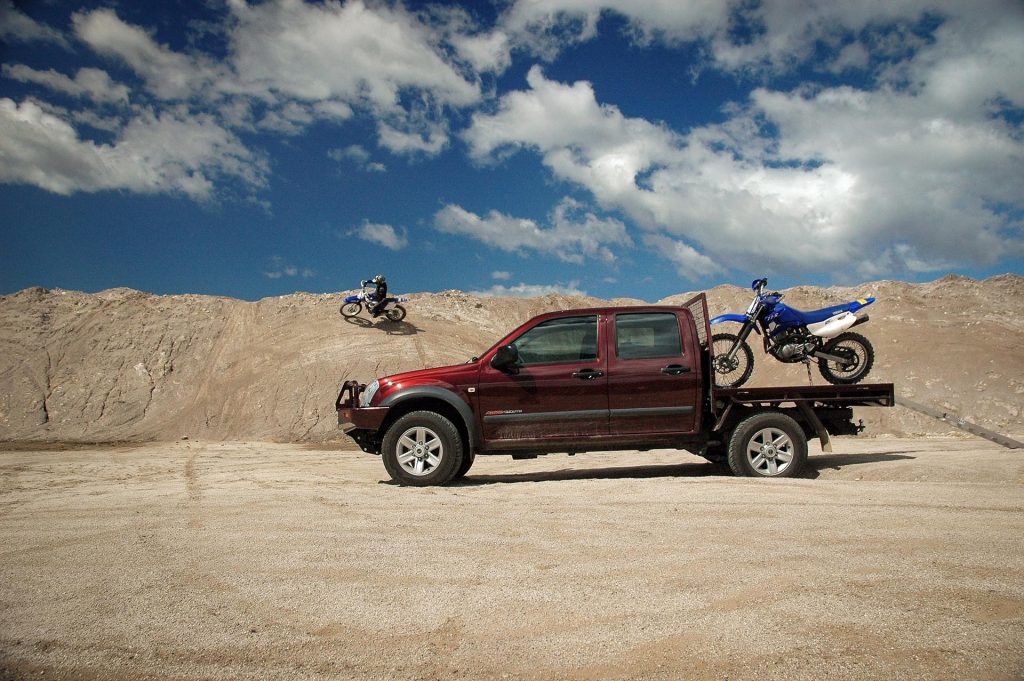 Secondly, unlike the earlier 2002 model, there is virtually no provision for the fitment of additional switches in the dash, which get used for the revolving amber safety light and external work lights. Again, a little more thought could have gone into this area for a vehicle destined for the working man.

At the time of writing, the RA Rodeo was relatively new. It was settling down. It indeed showed a tenacious heart after hauling my tandem trailer and tray filled with a healthy load of firewood out the steep bush tracks Northeast Tasmania. However, the decision to locate the intercooler in front of the radiator was poor, with high engine temperature and excessive fan-on time when the engine is working.

This RA Rodeo has a kerb mass of 1787kg add 180 kgs for the tray and another 160 kgs or so for the bulbar, winch and fuel, which gives the RA Rodeo a payload of roughly 800 kg. Couple it all to a braked tandem trailer with a tare of 470 kgs; add 30 kgs for chainsaws and tools, which gives the trailer a payload of 1500 kgs according to the specification in the brochure. All this brought a massive smile on Auntie Marg’s face, the recipient of almost 2.5 tonnes of firewood. 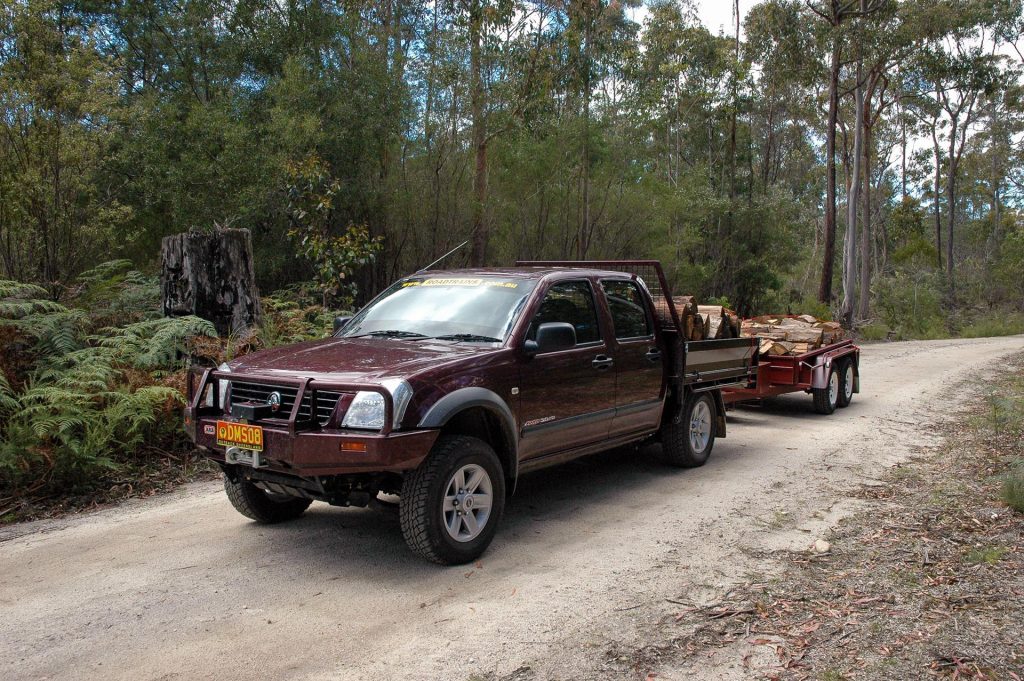 In terms of an all-around practical vehicle, which has the versatility to traverse the Simpson Desert or tackle the corrugated Telegraph track to Cape York one week. Then take it through a carwash before heading into the valet parking at the Hyatt in Melbourne the following week. You’d do well to find something that can match a Holden Rodeo.

Editor’s Note: Before being sold, this vehicle ended up doing over 280,000 km without any mechanical faults. It scored ten out of ten for reliability but failed to impress at the fuel bowser with the fuel economy.