Boardtrack Beauty! – Custom Shovel in a board frame…

Wind the clock back three and bit years… Walter Trout or Wal, as most folks up the northeast of Tasmania know him, was tinkering on his bikes in his shed after work. For sometime now he’d been tossing around the idea of building his own custom ride. After all he had an old shovel engine out of a 1980 FX that he’d ridden for years, sitting under his bench collecting dust. What a great starting point for the first build he’d often contemplated. 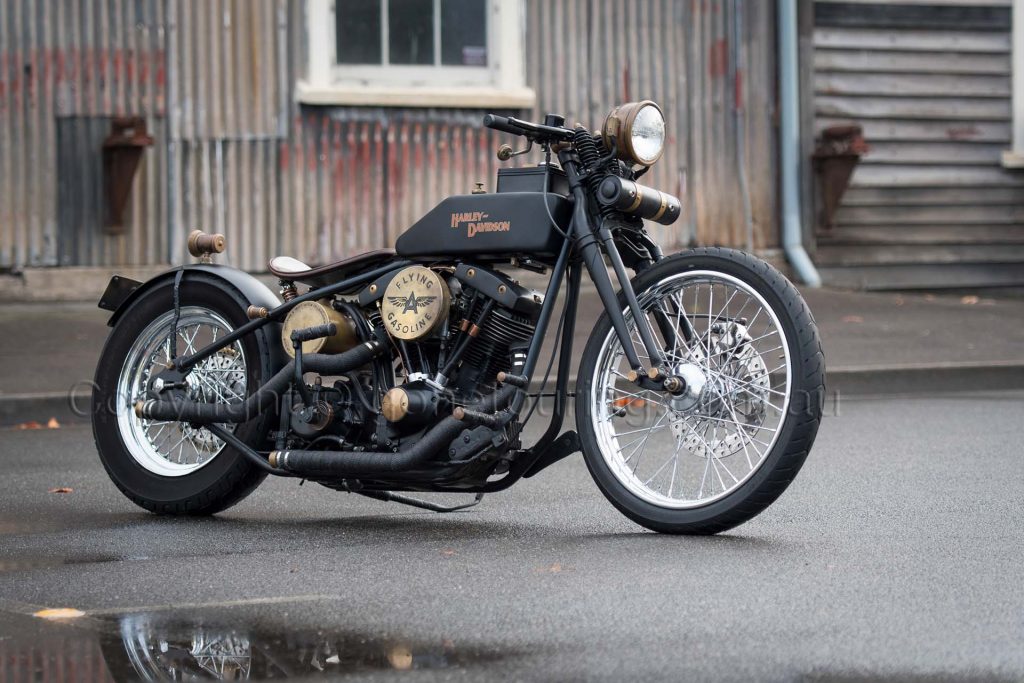 This particular night he was thumbing through the pages of and old HD Magazine when he spotted the picture of a pretty trick custom bike with a Shovel engine and right there decided that was the style of ride he was after.

After some extensive research Wal decided to use a Paugcho S131 rigid frame with a 30-degree rake for the backbone of the project. As he was chasing a classic old bobber look he decided on a Replica UL Springer fork assembly with a 21-inch 40 spoke rim to complete the front. 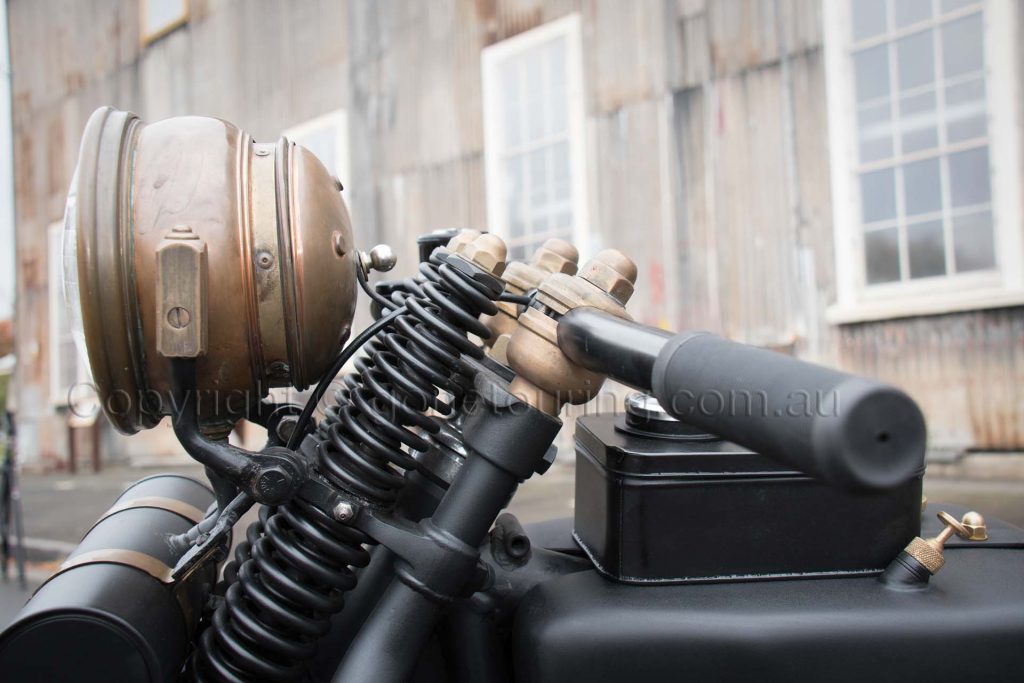 The rolling chassis was taking shape nicely and with the old Shovel engine sitting in the mocked up frame Wal was pretty excited about the progress and how well it was all coming together. However, his excitement hit a brick wall when he took the tanks he was going to use for the build off his old Fatbob and sat then on the Paugcho frame.

“It just looked so ugly,” Wal recalled. “I knew it wasn’t going to work so I went home somewhat dejected that day. Nevertheless, a few days later I was at the kitchen table with a big polystyrene block and roughly hacked out a rather crude square shaped tank. It looked really slick right from the get go.”

“Right then the theme changed to build something would resemble a board-tracker,” Wal added rather passionately. “So then everything happened around a fuel tank.” 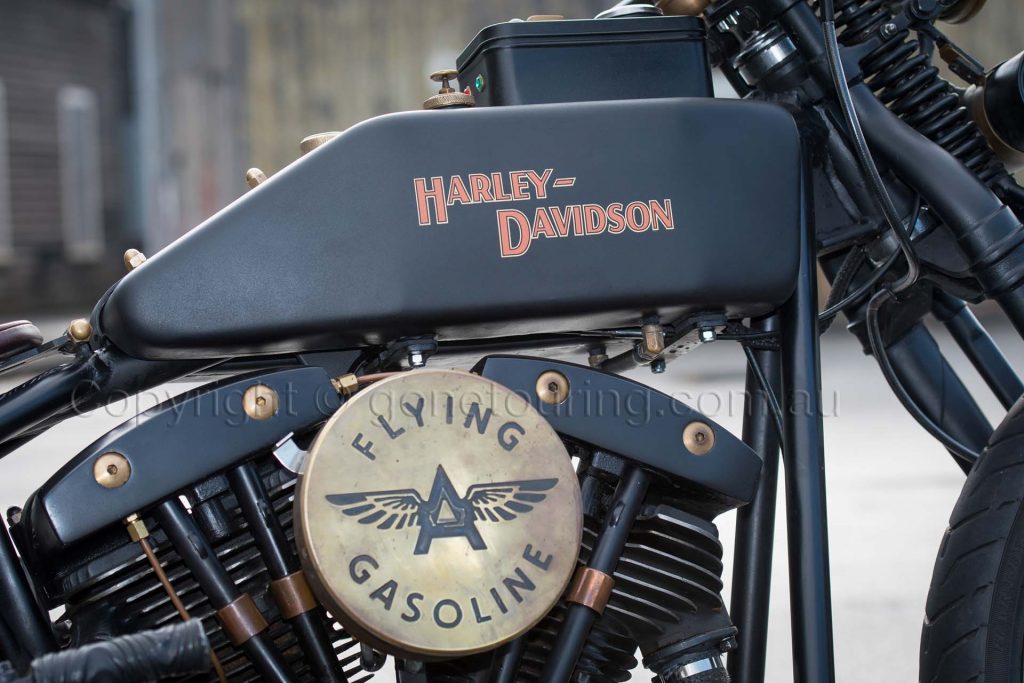 “This tank is about the sixth one I’ve made,” Wal explained. “Look I’m not a welder or sheet metal worker by any means. However I’d originally engaged an experienced fabricator to build the tank but after six months of waiting I’d nothing to show and really got sick of his shallow promises. Consequently I bit the bullet, went out and purchased a MIG welder then taught myself how to weld. After that I figured out through a lot of experimentation and persistence how to build a tank from scratch. Once I’d mastered the art of creating two identical halves the tank came together quite easily.”

In order to give the tank that J-Model period look, Wal need a small box to house the switchgear, which would operate the bike’s electrics. He found the solution in the form of a ten dollar chocolate tin from the famous Goulay’s Sweet shop in Launceston. 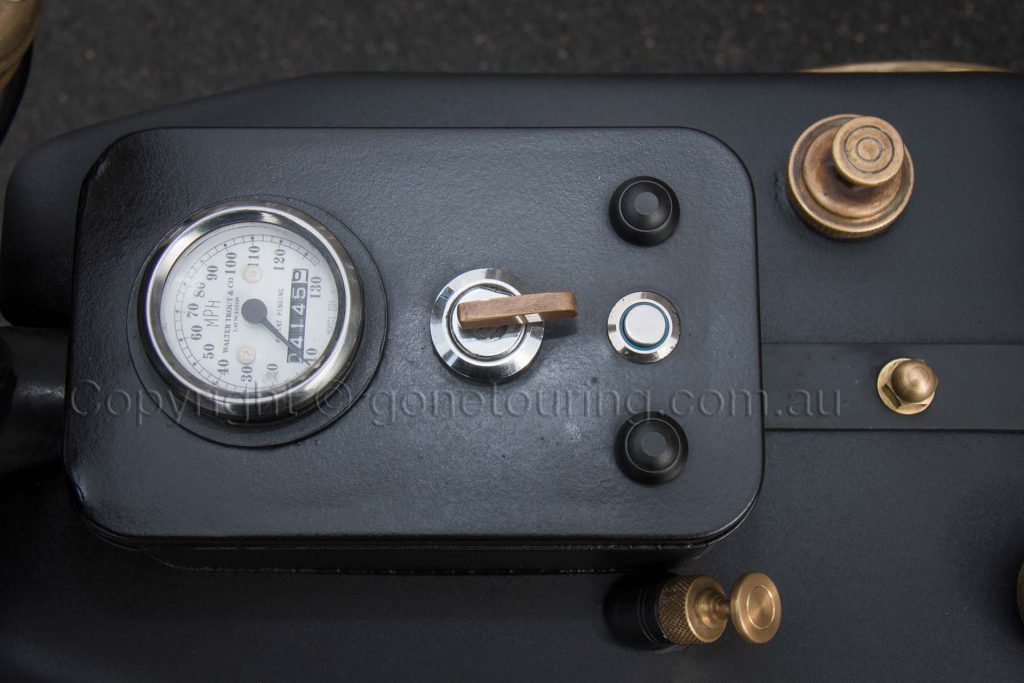 A chocolate box houses the electrics

“It was the perfect fit,” Wal revealed.  “It also became a convenient place to terminate and house all the electrical wires. I wanted to the keep the handlebars free of wires and retain a clean neat look similar to the original board-track racers, yet still be a practical and street legal ride.”

To keep with the period look of the tank, he also added the fuel primer and oil-pump, which were common on J-Models of the early 20’s. Wal has cleverly disguised the fuel tank breathers in these two custom pieces and if you look closely you’ll notice that they have tiny holes drilled under the top, which allows air to flow in and out of the tank. 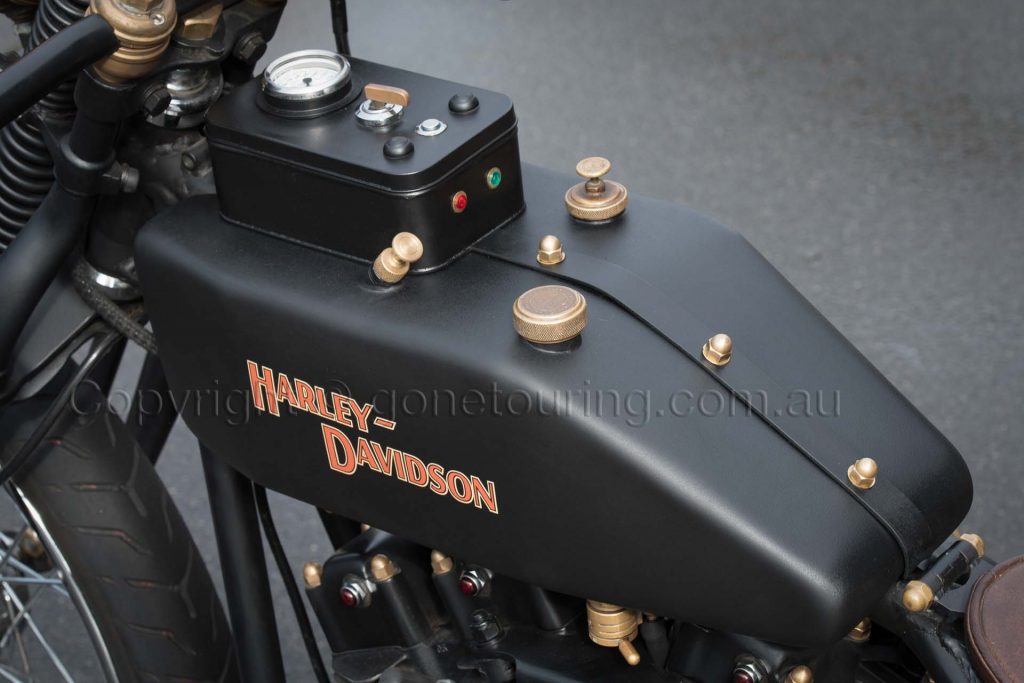 “My good friend Hank VanTurner did all the lathe work for this build,” Wal explained. He turned up all the brass work including all the lights. The headlight is actually an old brass potpourri bowl I found at the markets one Sunday morning that managed to pick it up for a few dollars. Hank machined all the brackets up out of solid brass to mount it as well the retaining ring to hold the 12-volt light in place.”

“Hank also machined all the handle bar risers and clamps,” Wal added. The idea was to keep everything at the front of the bike really clean. So we came up with the idea of mounting the speedo cable on the rear wheel assembly where the brake caliper would traditionally be located. This forced us to use an 11½ inch sprocket/disc combination which came with a 4 piston caliper. Hank machined up a suitable spacer and milled a slot to receive the speedo’s drive lugs. Not only did it function as we’d expected but it really looked neat too.” 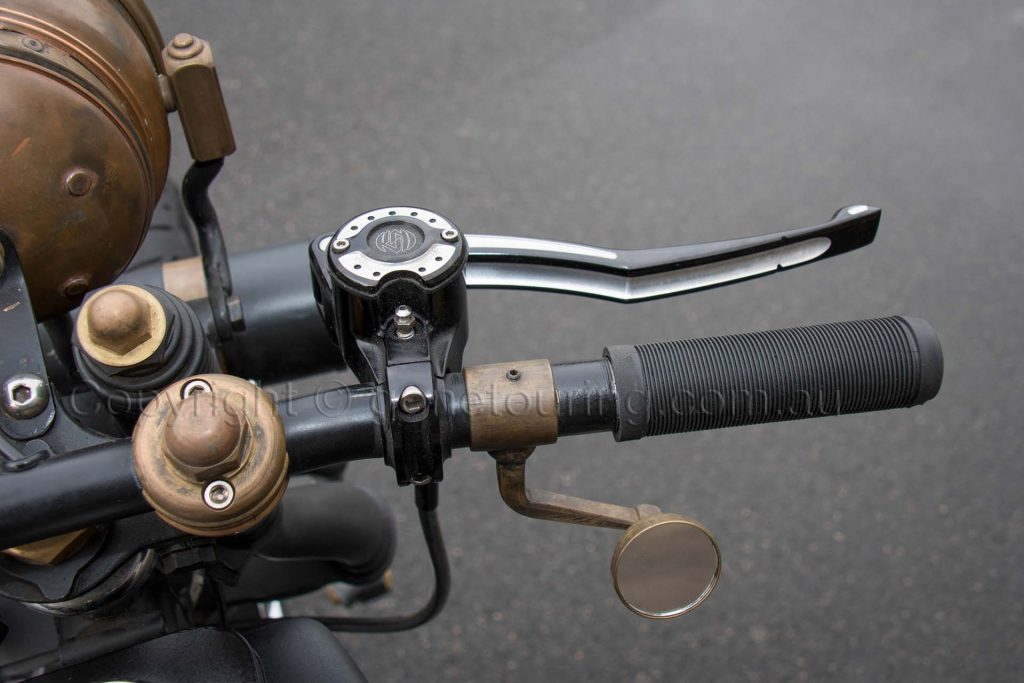 Wal was keen to ensure his old 1980 Shovel engine would deliver enough power to honour the legacy of a boardtrack racer, in short, he wanted it to have plenty of punch. Back in 80’s Wal had tweaked the engine up with a set of Andrews B grind cams and S&S Super E carby, which gave it substantially more punch to tackle the terrain in Tasmania with a tenacious attitude.

Even though that Shovel engine was still in running condition, Wal reckoned it was time for it to have another freshen up. He sent it up to Lewis Cooper in Hillwood, where the engine was stripped down, balance and rebuilt. 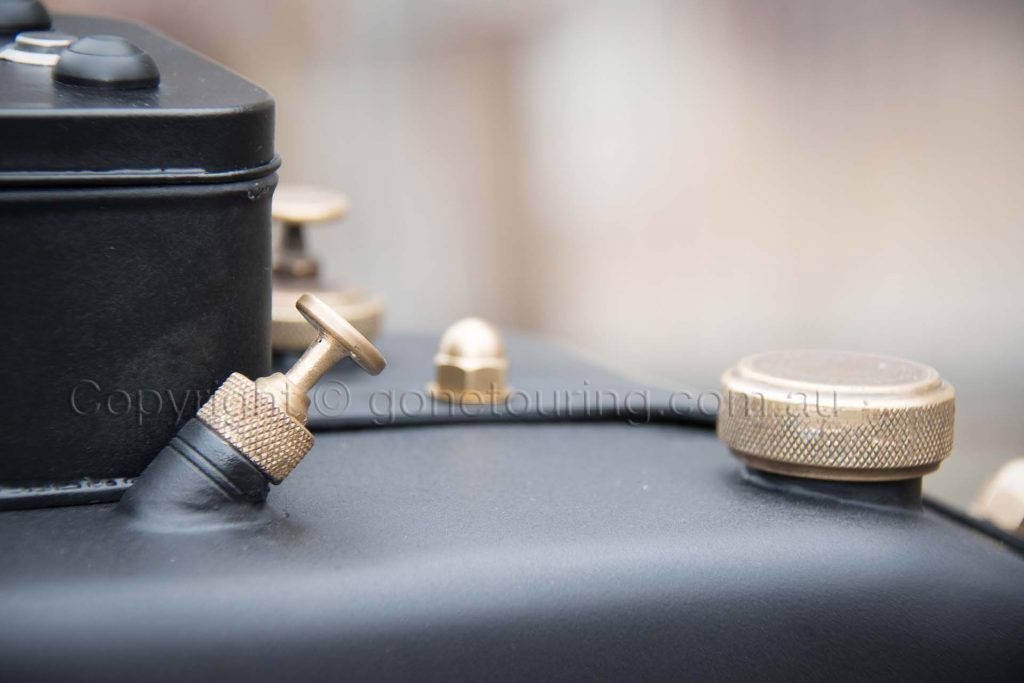 “Thankfully it’s easy to start and ticks over nicely after the first kick,” he added with a smile.

Getting the power promptly to the back wheel is a task Wal trusted to a Belt Drive Limited  (BDL) 3-inch open belt primary drive and he added that the folks up at Rollies Speed Shop in Brisbane were really helpful with information when it came to sourcing the BDL primary drive.

“There’s an old physics law that states, everything at rest or in motion tries to stay in that state until an outside force works upon it”, Wal informed. “For instance on a bike when you twist the throttle, the engine accelerates. Then it has to move all the components connecting the engine to the tranny, the tranny itself, and finally the rear drive and wheel. However because of this, it takes a certain amount of power to make that change and a certain amount of time to accelerate the mass of all the components. Consequently if I could reduce the mass of the primary drive then engine doesn’t have to work as hard, and it will accelerate faster, which is the theory behind installing the open belt primary. Plus it looks pretty cool too,” he added with a smile. 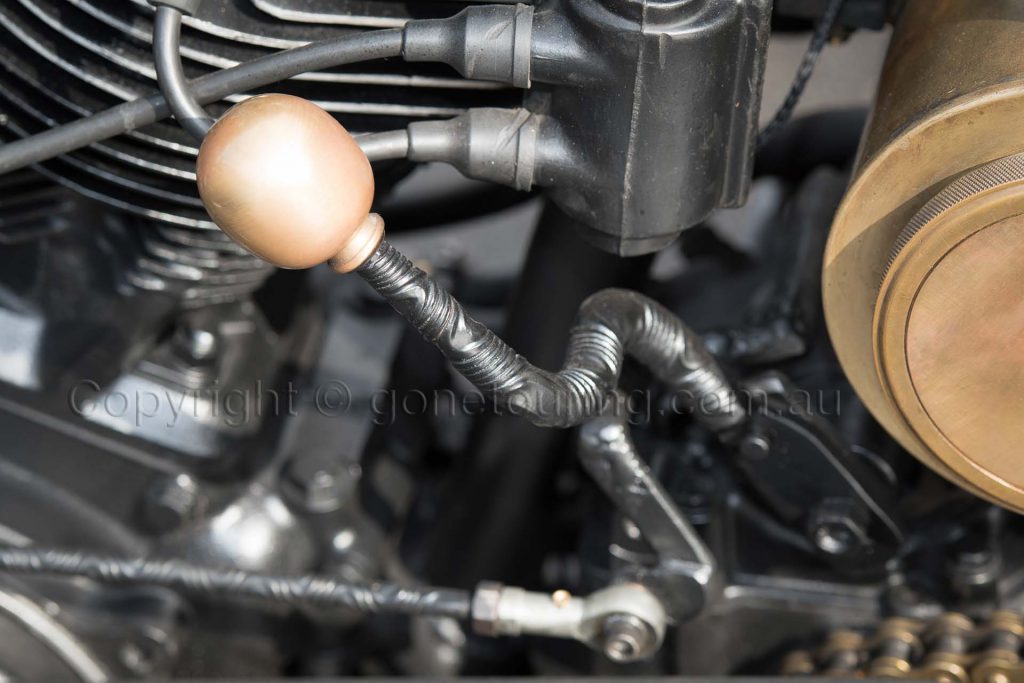 The distressed twisted metal used on the foot pegs, jockey shift and rear guard mounts were machined and fabricated from pieces of steel that Wal had a visiting blacksmith from the USA create.

It’s worth having a look at the speedo face to; it’s a one of a kind. “I built that before Hank came on the scene,” Wal said.

“I’m a songwriter by trade so designing the etchings for the brass oil tank end and air cleaner cover were some of the easier parts of the build. The tank decal is one of my originals too.”

Wal painted the bike himself with in satin black finish on the frame, tins and engine that really complements the aged brass components and finished off the look he was going for nicely.

“The build number JS-001 signifies the J-model style with a Shovel engine and the 001 is my first build,” Wal revealed. “You’ll notice that I’ve added Hank’s name to the oil tank.” 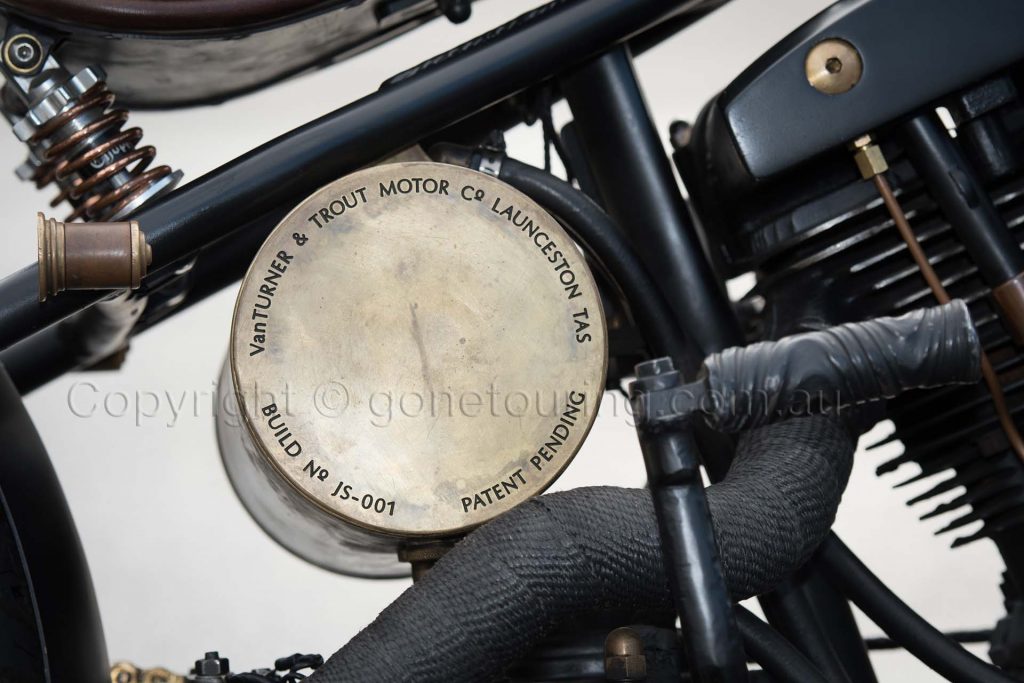 One thing Wal was adamant about is that he built the bike to be ridden not hidden and if look closely around the base of the bike you can see the signs of hard rides. There’s certainly a few tell tale signs of bitumen scars.

“It’s surprisingly comfortable to ride for hard-tail bike,” Wal admitted. “I fitted those little chopper shocks to the seat which I picked up in the states and now its got a few thousand kay’s on it, they’ve settle down and its as comfortable as modern Softail to ride.”

“By the way I’m keen to start building JS-002 if anyone is interested,” Wal smiled as he through a leg over his ride, shifted the jockey lever to engage first gear and clutched off into the traffic with the old Shovel resonating it rambunctious note up Invermay Road. 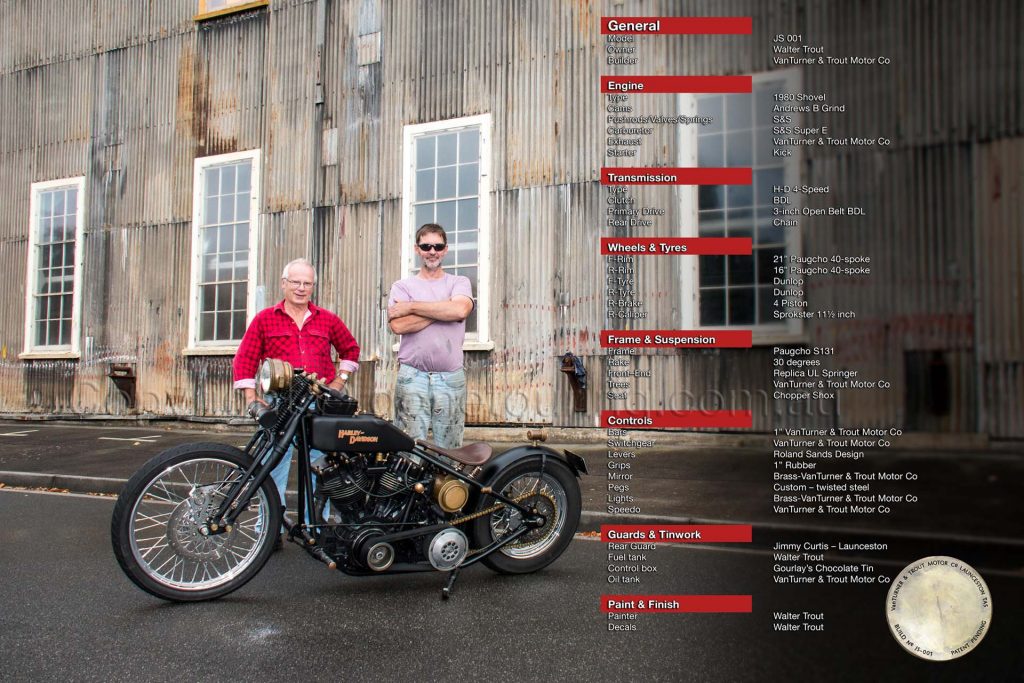