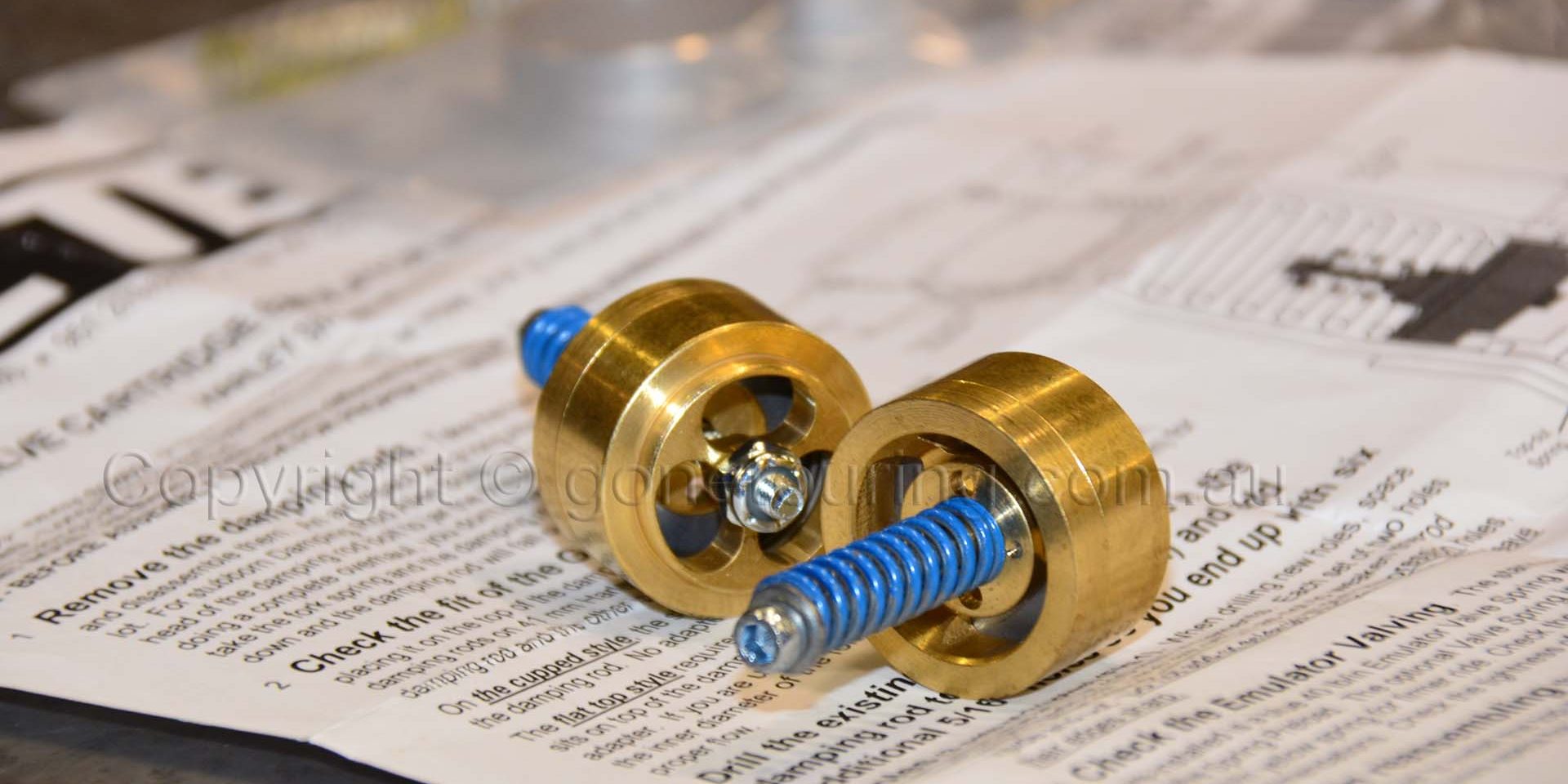 How to iron out the bumps with gold vale emulators.

If you have travelled any distance on one of Queensland’s many road networks over the past few years it doesn’t take long to discover that the state’s road system is in an appalling condition. This hasn’t been helped either by the horrific flooding the state has encountered over the past two wet seasons. Consequently these rutted pot-holed and patched up roads make a motorcycle’s suspension work overtime. 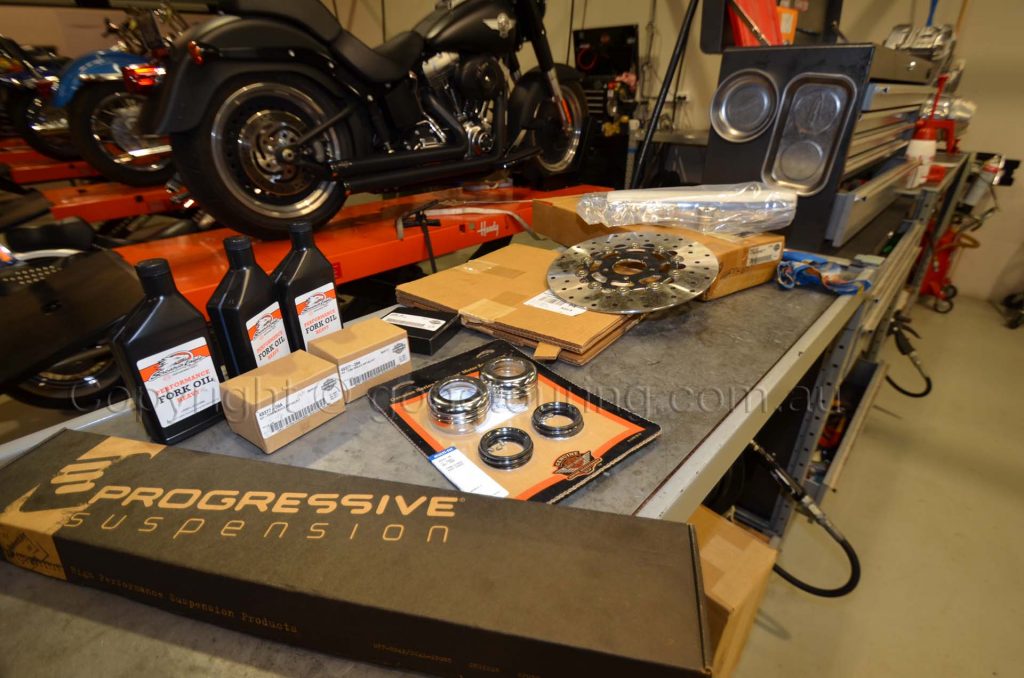 Needless to say, the bike’s handling and ride comfort really suffer as the suspension’s oil and springs cop a pounding. Such was the case with K-Bear’s Softail.

Since she picked up her ride back in 2009 she has ridden it up and down most of the States on the east coast of Australia. It has clocked up a trouble free 60,000 kilometers, with a stock H-D front suspension. The standard H-D rear shocks were replaced with a set of Progressive 422 Adjustable shocks back in 2011 at around 30,000 kms. At the same time she had the fork oil changed as routine maintenance. However lately, after adding another 30,000 kms, mostly on Queensland roads she had been noticing the bike’s handling dropping off. The bike began to wander when on rough sections of bitumen. Then it dipped and dived when cornering and under braking. Basically it had become a real pig to ride. 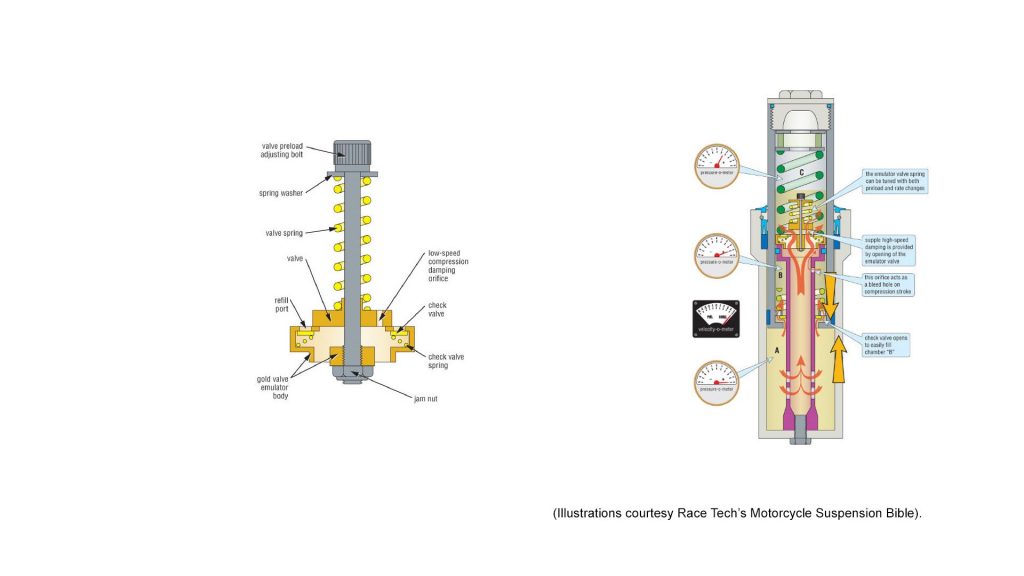 Needless to say her front end need some TLC. After some research and several discussions with Brent Story, director of Suncity Harley-Davidson, Townsville. It was decided to rebuild K-Bear’s front suspension. A new set of Progressive’s, progressive rate springs and add a pair of Gold Valve Emulators were short listed.

Both Brent and K-Bear were well aware of the benefits of adding the Progressive Springs. “My partner’s Fatboy has Progressive springs and it really handles well, K-Bear revealed. “I’ve ridden that on the windy roads around Tasmania. It is a real pleasure to ride, so I’m pleased they included Progressive Springs in the rebuild.”

Basically with Progressive springs, they provide a stiffer feel at the start of the stroke and soften as the stroke lengthens. This helps prevent the bike from diving under brakes and when cornering. Conversely, out on the highway you should experience a nice soft ride as the fork extends through its full stroke. And they work really well.

However, if you add a set of Gold Valve Emulators then you not only gain the benefits of the Progressive springs but you get a far more responsive suspension. that can easily be fine tuned to suit your riding style. 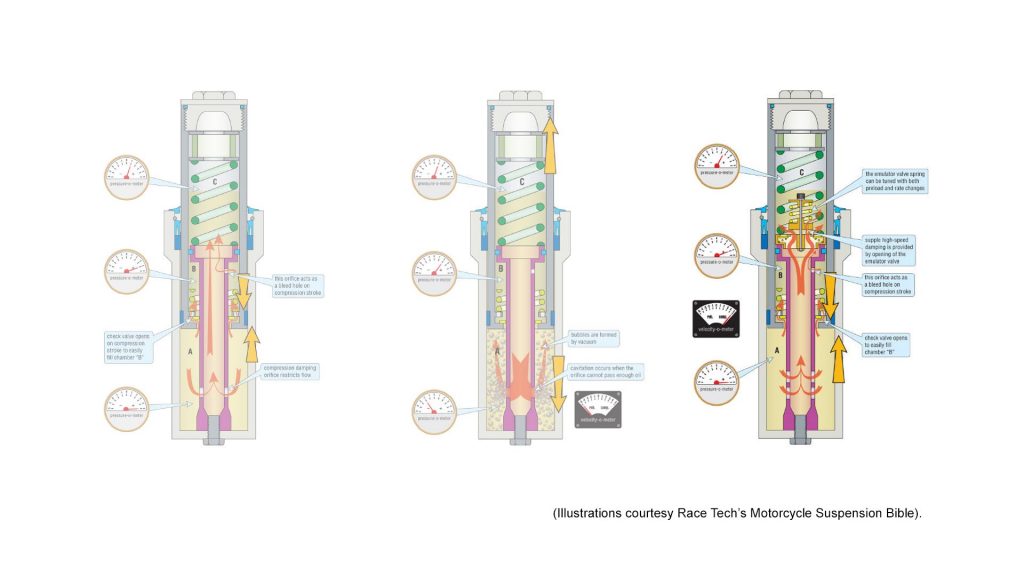 To understand how the Gold Valve Emulators work its probably worth recapping how the front suspension of a motorcycle works. The most common front suspension on a motorcycle be it a trail bike or Harley is the Damping Rod Forks. They’re simple and less expensive to manufacture but are limited as to the level of damping control they deliver.

About here I’ll refer to some excerpts from Race Tech’s Motorcycle Suspension Bible in explaining the anatomy of Damping Rod Forks, that you’ll find in your Harley-Davidson.

The fork slider is attached to the front wheel and fork tubes are located in the upper and lower triple clamps on the frame. The main fork spring (in K-Bear’s case a new Progressive Spring) is located directly on top of the dampening rod. This is attached to the bottom of the fork slider. The main spring supports the sprung mass of the front of the motorcycle and rider. There is another smaller spring between the top of the Damping Rod and bottom of the fork tube called the top-out spring, which prevents the fork tube banging into the damping rod when the forks are fully extended.

In the next diagram you can see that as the fork compresses, the volume in chamber-A is getting smaller while the volume in chamber-B is getting larger. This means the oil pressure in chamber-A increases while the pressure in chamber-B decreases. However, as soon as movement occurs, the rebound check valve opens and allows fluid to pass easily into chamber-B. This means the pressure in chamber B is only slightly less than in A, and you can practically consider chambers A and B to be one chamber (AB).  At this point, the volume the wall thickness of the fork tube displaces still needs to get out of chamber AB. It escapes through the compression damping holes located at the bottom of the damping rod, up through the center of the damping rod, and out into chamber-C. It can also travel out through the rebound holes in chamber-B, but this is a much smaller volume. 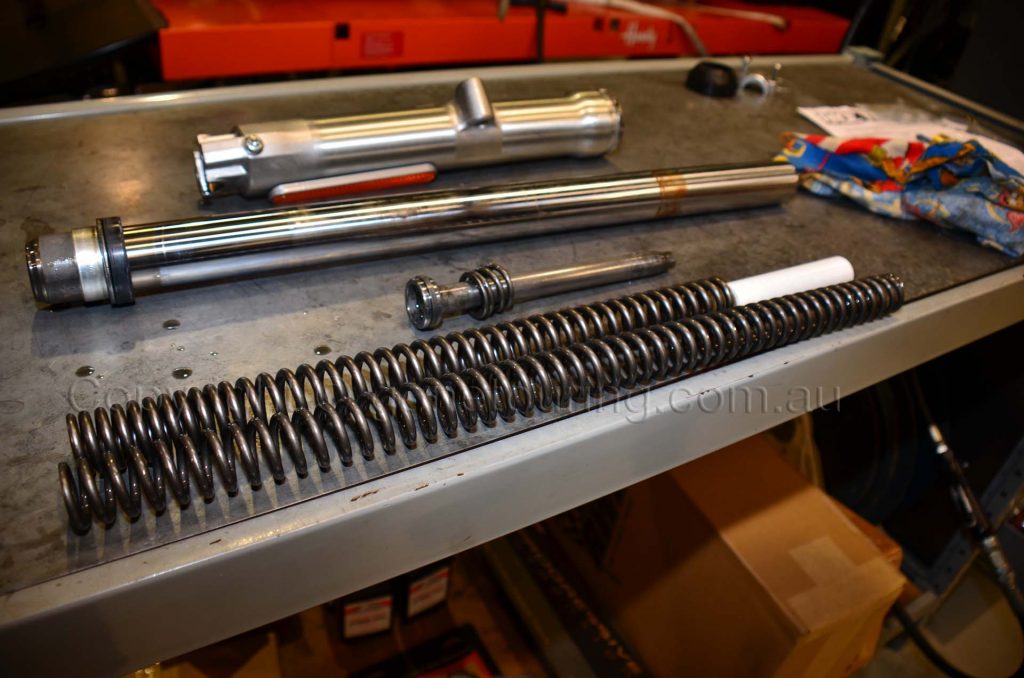 This type of damping is referred to as orifice-style damping because the resistance is created by forcing oil through holes or orifices.

Unfortunately, not all bumps are rounded and small in size. When a square-edged or large bump is encountered, orifice damping can create a very harsh ride. Because oil is not compressible, the faster the fork compresses, the faster the oil is forced through the compression damping holes.  Orifice-style damping increases very rapidly as velocity increases. In fact, the damping force increases with the square of the velocity. This means every time the velocity doubles, the damping increases by four times.

We have illustrated this by showing the thick flow arrow being squeezed at the entrance of the small orifices on a high-speed hit. 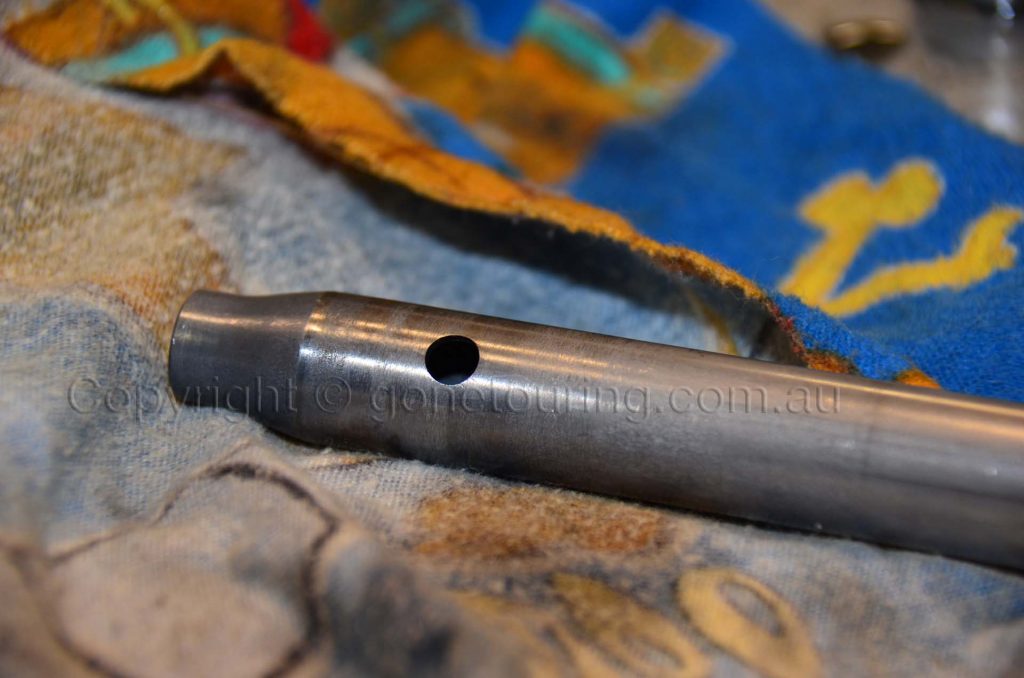 Now to refer back to the poor state of Queensland roads, that are rutted pot-holed and patched up, which make the suspension work over time.

Maximum compression velocities often range from two to six times greater than those during rebound. Thus the limitations of orifice damping are less critical for rebound than for compression. A major potential problem of a damping rod fork is cavitation. Cavitation is the formation of vapor bubbles in a flowing liquid caused by a decrease in pressure. This occurs specifically in areas where the pressure of the liquid falls below its vapor pressure. This is the same phenomenon as boiling. But in this case it is caused by a decrease in pressure rather than the addition of heat. 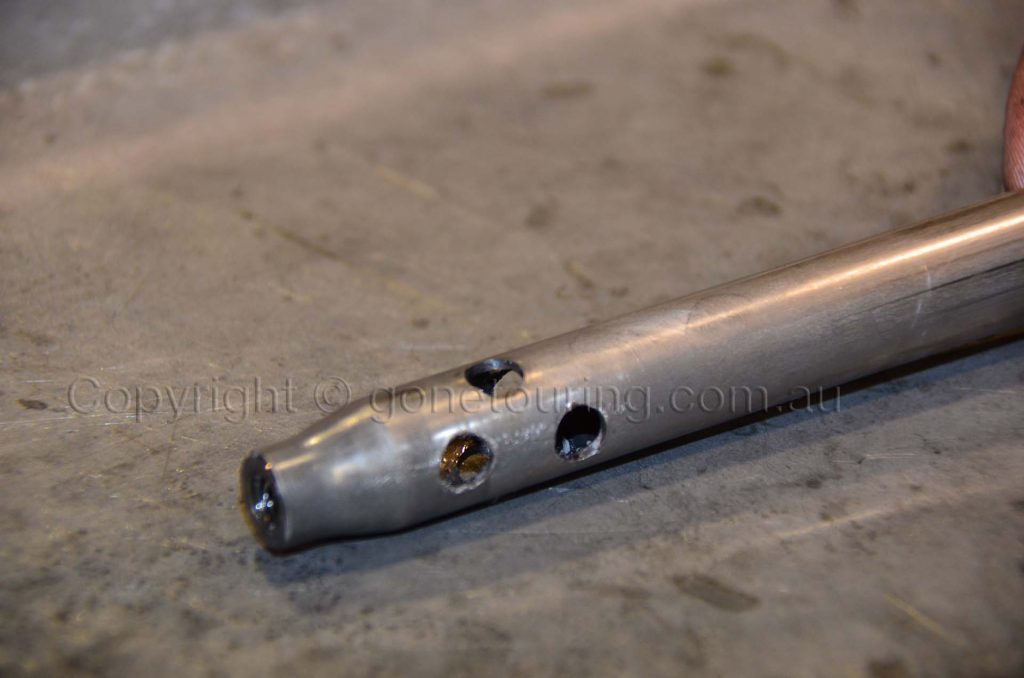 So how do we achieve a firm handling motorcycle that delivers a comfortable ride? The answer is to install a set of Gold Valve Emulator. Then perform the simple modifications recommended to the damping rod.

The emulator takes over compression damping duties from the damping rod. To do this the damping rod compression holes are enlarged and, depending on the model, increased in number. With larger flow area the restriction at the compression holes becomes negligible. It is certainly still there, but the effect is so small it is no longer significant. Instead, all the compression damping takes place in the Emulator.  With the Emulator installed on top of the damping rod, low-speed damping is controlled by low-speed bleed holes in the valve piston. Oil flows unrestricted from chamber-A to the inside of the damping rod, then up toward chamber-C. At the lowest velocities there is not enough pressure to open the main valve piston. All the oil goes through the Emulator’s low-speed bleed hole.  At higher velocities, particularly when the wheel encounters a square-edged bump, the forks must move rapidly. The oil pressure builds in chamber-A and beneath the Emulator where it lifts the Emulator piston off its seat. This allows the oil to flow into chamber-C.

Once installed, making changes is relatively easy. First remove the fork cap and main spring. Use either a long welding rod bent over at the end, or a “parts grabber” lift the Gold Valve Emulators out of the fork tube. Adjust the valve spring preload and reinstall. This can be done on many bikes with the forks still mounted. 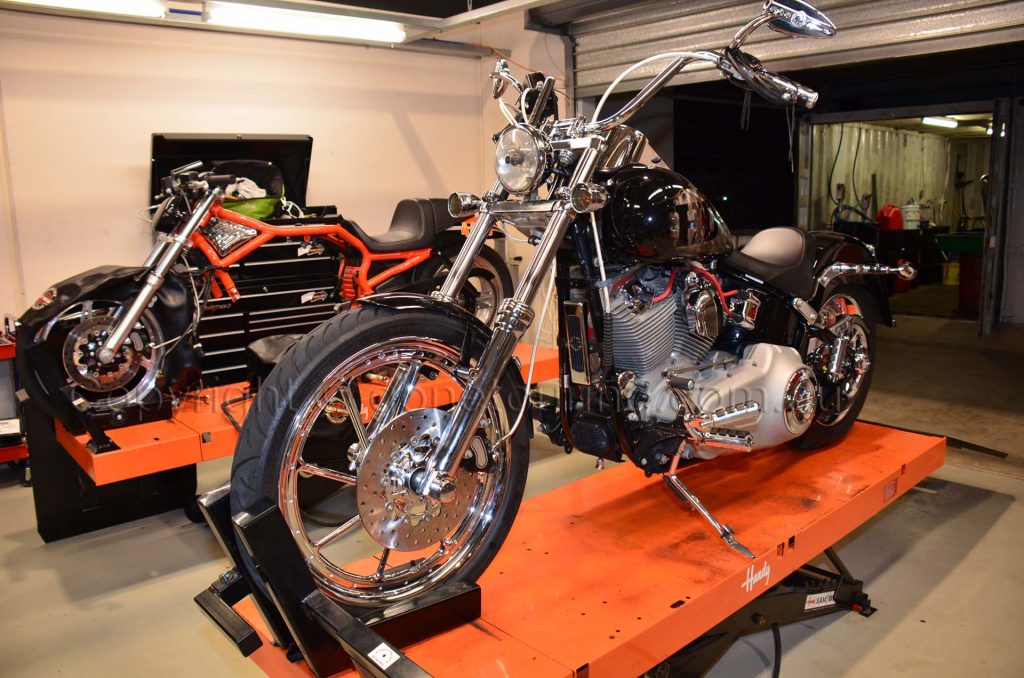 “We set the suspension up to the standard recommended in the installation manual,” Brent explained. “However, both Progressive and Race-Tech provide comprehensive instructions for fine tuning the suspension. This makes it east set up to suit your riding needs.”

Judging by the smile on K-Bear’s face after her first ride she is more than impressed with the result. “I’m glad we’ve ironed out those bumps,” K-Bear smiled as she took off her helmet.

After my test ride on K-Bear’s Softail I’m going to get a set fitted in my bike. The improvement in handling and ride is amazing.

We rode the bike on a short circuit around Townsville that had few bends and plenty of bumps along with a patched up section of road prior to rebuilding to the suspension. To gauge the difference after the refit.

On the first run the bike bounced its way along most of the rough section however now was absolutely smooth, and you could see that the wheel now remained firmly on the road with the new suspension reacting quickly to the bumps. Cornering and braking have also vastly improved.

Special thanks to Brent and the staff at Suncity Harley-Davidson for the help compiling this article on Gold Valve Emulators.