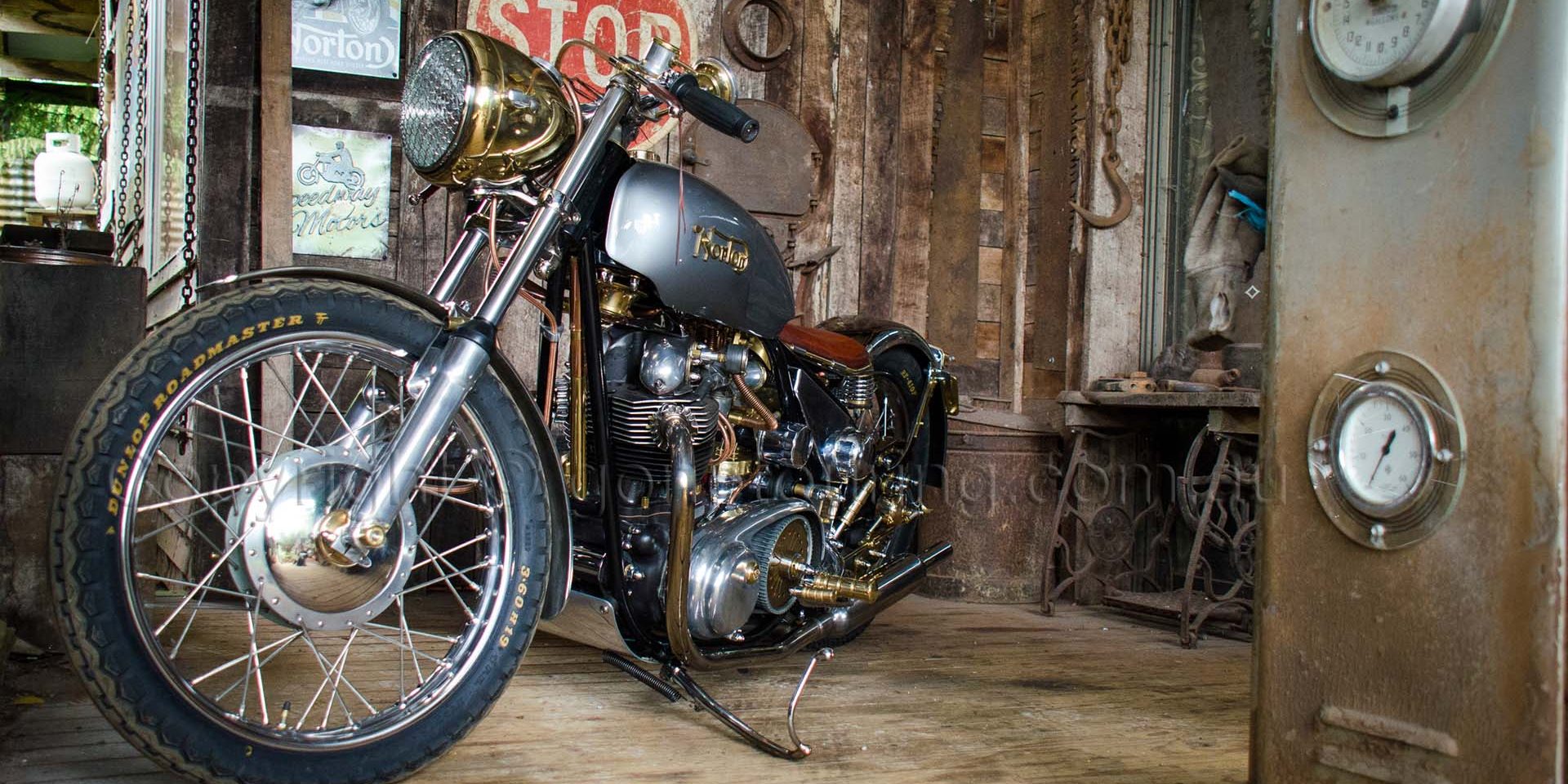 Building a custom bike on a meagre budget is dead set impossible unless that is, you’ve got the technical ability to handcraft most of the parts yourself as well as the knack to scrounge and swap most of the bits and pieces. Well, that is exactly what Les did to complete his ’49 Isle of Man Norton Roadster. 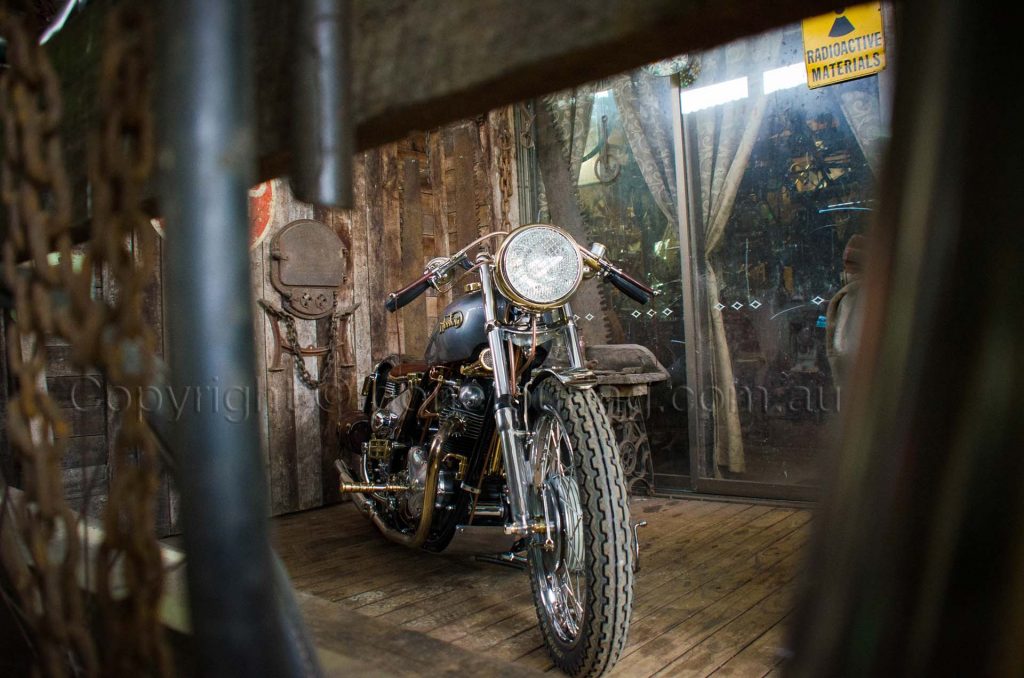 My first glimpse of this stunning 49’ Norton was at a recent bike show. Surprisingly, however, it was parked in the outside bike park along with all the other daily rides some distance from the main show event.

“This certainly needed more investigation”, I quietly mused to myself as I took a few happy snaps before setting off in search of the owner. Sometime later I tracked him down, introduced myself adding how I admired his bike and was interested in writing a yarn.

We agreed to meet up in a few weeks and exchanged numbers. As we parted I glanced down at the note he’d written his contact details then turned back towards him and asked “Les?” he smiled and replied, “Les said the better”. Had I just met the real Les Norton star from the famous Robert G Barrett novels?

Early Saturday morning a few weeks later over a piping hot coffee the story behind this impressive Norton build began to unfold.

“I’d had a few Harley’s over the years,” Les began. “Besides, everyone has Harleys and I wanted something a little different. The idea of building a Norton had been lurking in the back of my mind since I was a teenager. I had a clear picture of what I wanted the final result to look like; I’d probably built it in my head about a million times over the years. ” 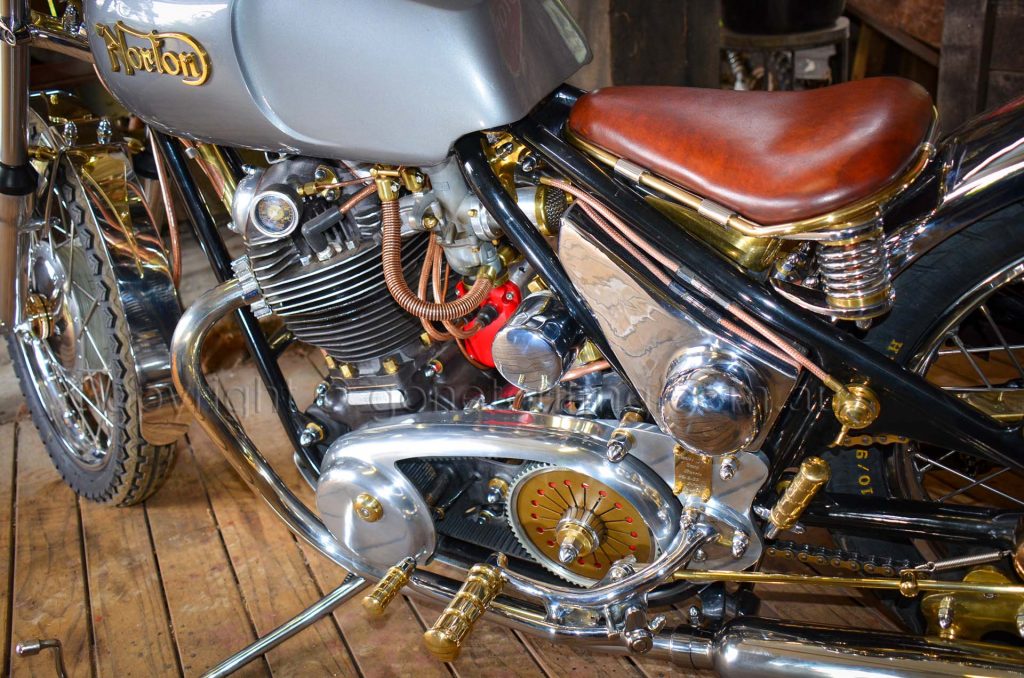 Back in early 2008 when Les arrived home with an old Norton frame and dismantled 73’ Norton 750 engine in the back of his ute he knew this project would take some time to complete and throw up a few challenges. However, he quickly admits he didn’t believe that transforming his idea into the finished vision was to prove a painstaking challenge that would take over six years to realize.

The original ’49 model Norton’s only ran a 500cc engine, Les wanted a bit more punch out of his new ride which is why he jumped at the opportunity to grab the 750cc engine out of a 73 model when it was offered to him.

“Norton motorcycle’s have had a bit of history at the Isle of Man in the early days,” Les recalled. “In fact, Norton won the first-ever TT in 1907. My idea was to try capturing the history of the Norton. “You don’t see many Norton bikes around these days even their standard form. However when you do see someone who has had a go at building a custom Norton they’ve generally grabbed a Norton motor and tossed it into a flat tracker rigid frame.”

“This bike of mine started life as a standard Norton frame and still has all the isolastics in it,” he added. “That was a challenge all on its own too. Norton engines are renowned for having a bit of rock to them. Most Norton’s run roughly when they idle but will smooth out once you hit the throttle. This engine is worked and fully balanced and still does have a little of Norton rock at idle but nowhere near as bad a factory engine.” 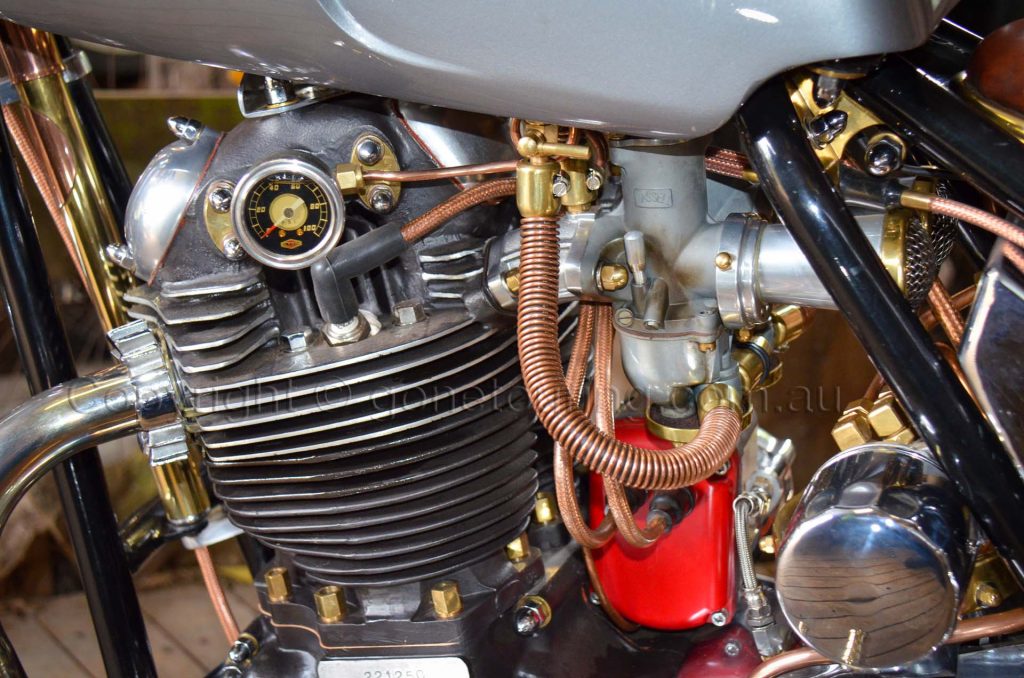 Les admits this engine rebuild was his first attempt at major engine reconstruction work, by “major engine work” I mean making some serious engine modifications not merely bolting it back together with a new set of pistons and bearings.

“To keep the traditional look of the ’49 style engine, I wanted to use the early model timing cover. This meant that I needed to move the standard ’73 magneto from the outside front of the engine to rear of the block back inside frame behind the cylinders.”

“It had the originally Pommy one which didn’t work at the best of times, Les smiled. “I fitted a Joe Hunt magneto with the ‘Retro Red’ bakelite cap. “Now that took some working out, I had to fit additional sprockets and chains and modify the oil ways to ensure everything would be well lubricated.”

The highly modified engine still runs the standard Norton carburettors with open throat stain-tubes fitted with gauze so moths and bugs won’t get suck in the carby while Les is out winding the throttle on in the fast lane.

When it comes to estimating how far the engine is bored out and how much power it produces. Les just leant back in his chair, smiled and said, “It’s bored out to the max and runs like a ‘raped date’. Needless to say, you’ve really got to hang on to it,” he added. 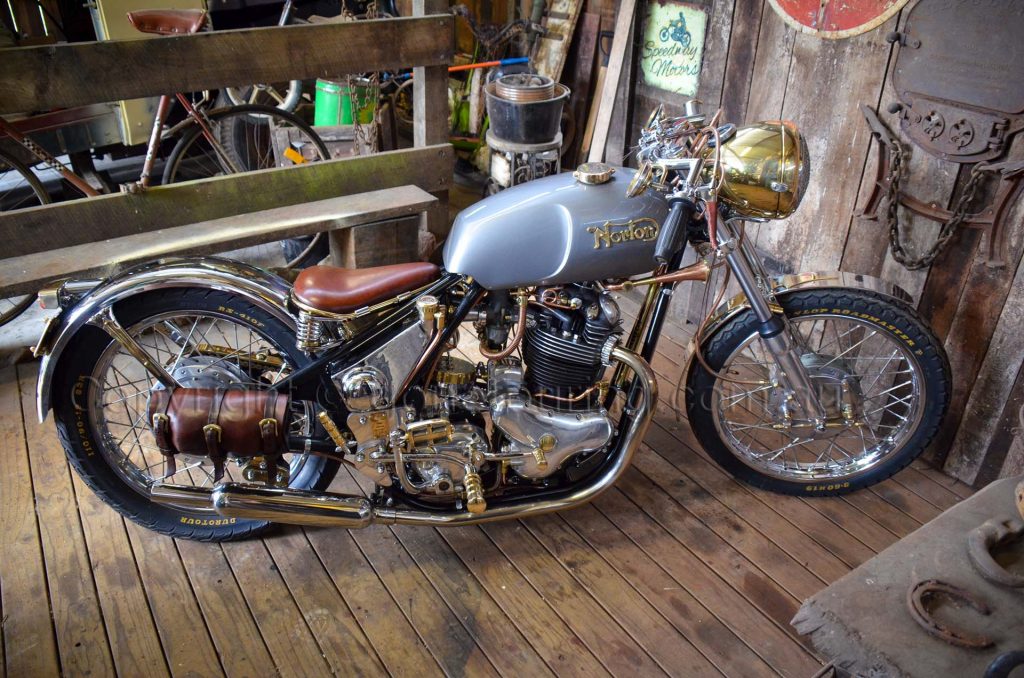 The intricate machining didn’t end once the engine was complete, there is a bracket the on right-hand fork leg that Les machined out of a solid aluminium billet. “There were several different angles and a couple of radii that needed to be machined into that piece. I started by building a cardboard template so I could check all the angles and the fit. It took a few attempts before I was satisfied enough to commence making the piece out of the alloy billet.

“Sometimes it would take weeks of trial and error just to make one piece by hand,” Les said recalling the despair he’d occasionally feel when he’d head back to the drawing board to redesign a piece that he’d spent days and days making.

Every now and then he’d catch a lucky break, as was the case the headlight. “It’s actually an old Lucas light from a car that I scraped all the paint off and polished up,” he said. “Like everything else it to has been highly modified to house all the switchgear and given the wire mesh in the front to suit the period of the bike. 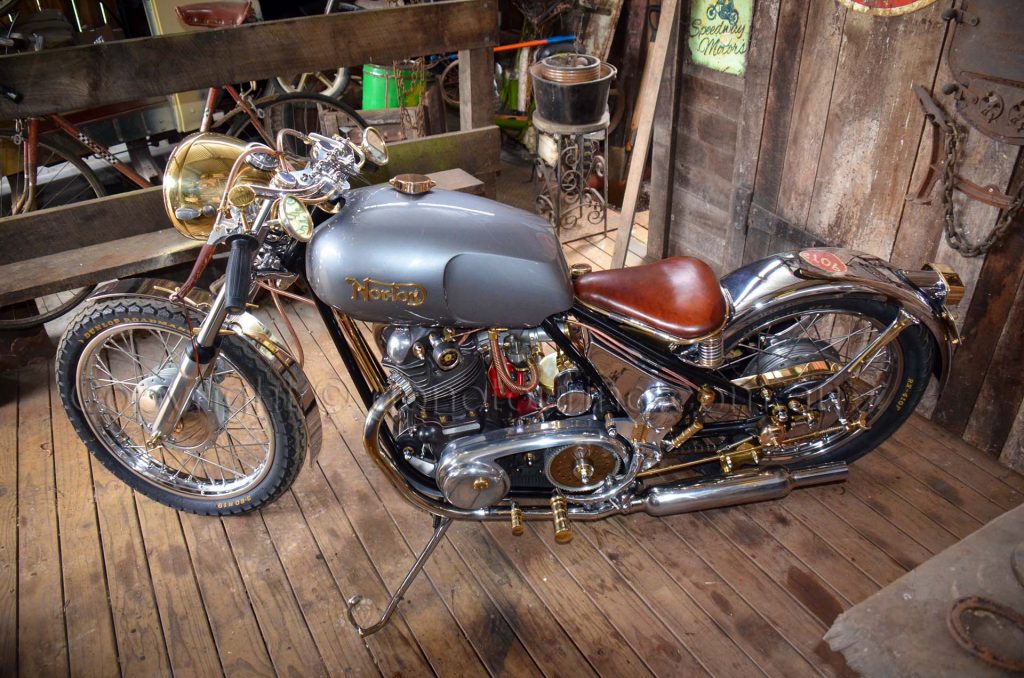 The custom brass badges from England

“Those brass badges on the tank I designed myself. I sent the pattern off to a chap in England who made them up for me. “They arrived back here in Australia a month or so later, very reasonably priced mind you and with a little note that read, if you have any other bright ideas please let me know.”

The badge is actually held on with wheel spoke adjusters.

Les wasn’t a fan of the original Norton dash, likening it to a Honda Four. He set about streamlining it to better suit the fast lines of an Isle of Man Norton Roadster. I’ve slimed it down to a; light for high beam, light for ignition and located the speed, which incidentally is in miles per hour into the headlight.

There was a large gap in the area above the transmission and Les made good use of this space by building a custom electrical housing. “The top of that electrical box is actually an end cap from an old discarded fire hydrant,” 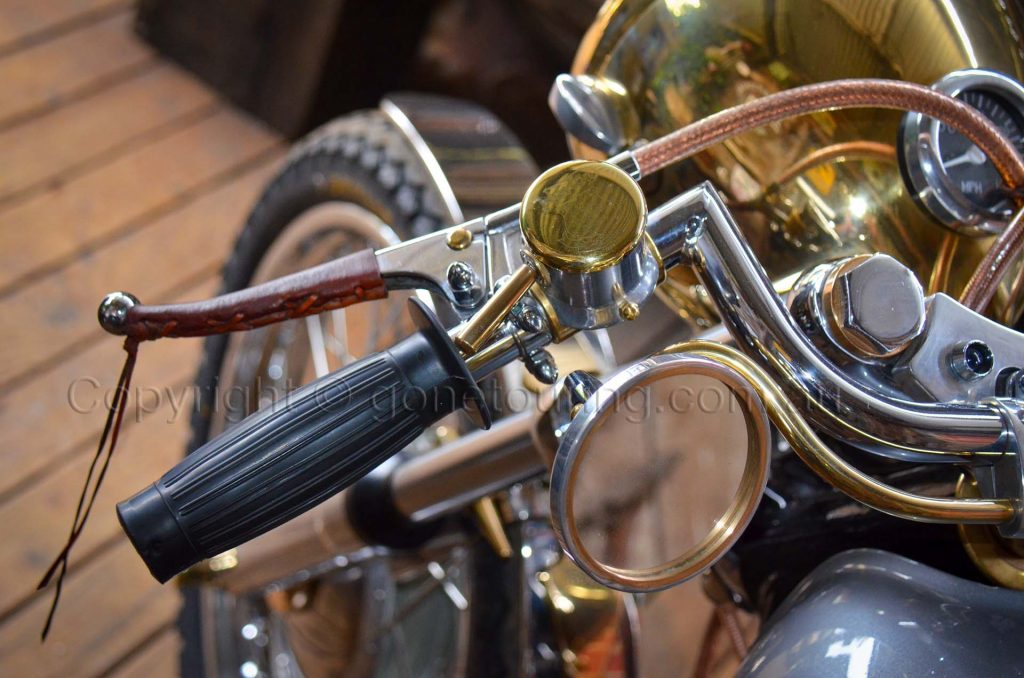 Home made mirrors from bowls

Back in the Day

To keep with the period of the bike, where blokes would commandeer bits and pieces from the kitchen then modify and mould them into parts for their bike, Les did much the same.

“That’s how it was back in the day,” Les added. “Mum would wake up one morning and be missing a heap of stuff out of the kitchen. The derby cover on the front wheel is an old steam lid. Sometimes its easier to modify something than make it from scratch.”

“Take the mirrors, they are full spun alloy billets that I’ve turned up on the lathe. Then I’ve made the brass inlay around the glass. But the backing plates are actually brass bowls that you dip your fingers in from the Chinese restaurant.”

“We get plenty of wildlife around this neck of the woods so I made up these critter whistles out of brass,” Les said. “I pulled one of those cheap plastic ones apart to get the pattern then made them up. The funny thing once I’d finished them. I’d put them up on the shed roof and blew some compressed air through them to see if they worked. I couldn’t hear anything when I blew the air through them. I was feeling my efforts might have been in vain.

“The neighbour’s dogs down in the valley had started barking so I wasn’t really in a good place mentally when I gave the whistles another few squirts of air. That’s when I realized those dogs barked louder and more aggressive each time I blew a squirt of air through the whistles. So I was more than pleased with how they worked.”

The fuel tank is a highly modified Commando tank

The fuel tank is a standard Norton Commando tank. Les filled the front out to give it a wider presence in the nose. “It probably chewed up $500 worth of liquid steel to do that,” he added. But one day I’d like to build an aluminium tank for it.”

“The engravings all around the bike are my own designs. I took them into town and got them all professionally done.”

Les pointed out that all the oil lines are hand done and took hours to carefully bend. The copper winding around the fuel line is another piece of Les’ handy work. He added that he scored the wire from some old power wire at the local scrapyard.

“The success of any bike build is a painstaking process. Which involves getting the stance of the bike right,” Les revealed, thoughtfully pointing toward the bike. “You’re halfway there when you have established the lines of the bike.”

“The seat was the last thing that I made for it I even did my own leatherwork,” Les said. “It gives you really nice road feel. The bike is very responsive to any input, if you twitch on the seat then that’s where you’re going.”

“I ride it whenever I can. But mind you, you’ve got to pick your spots. Because it’s pretty low and some places it just won’t go,” he smiled. “ There is only 12 pounds in the rear tyre. I made the mistake once of adding an extra pound or two and ended up busting the headlight off it. The front tyre I run standard pressure as you do in your Harley.”

Make no mistake, Les is adamant this Isle of Man Norton Roadster is a true street machine. It’s made to be ridden. 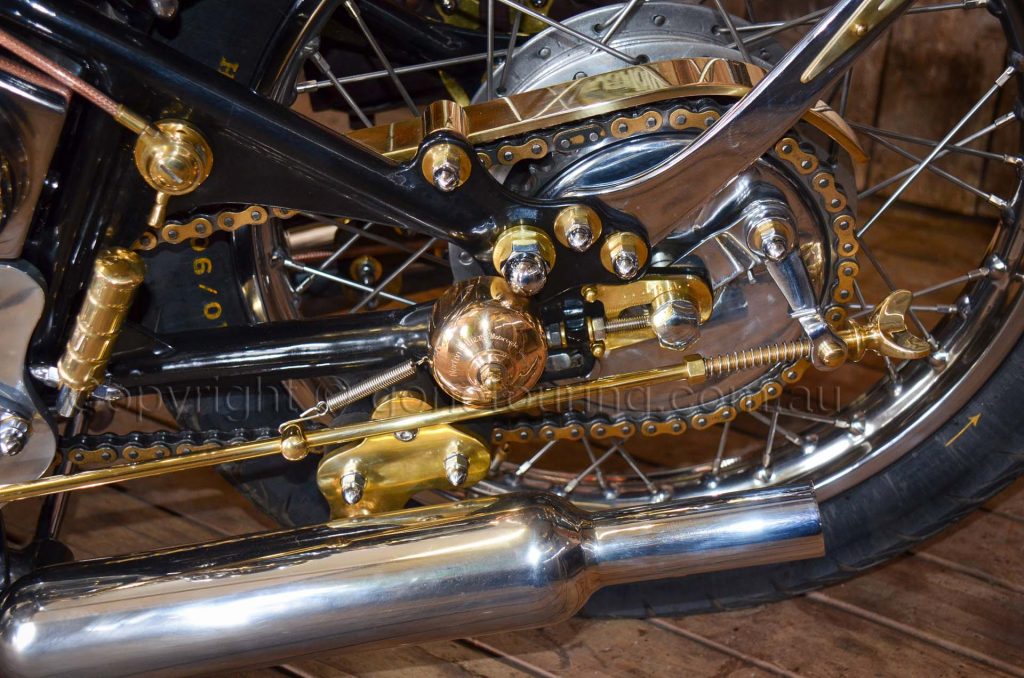 Each time you look at this classic custom Isle of Man Norton Roadster there is something different to see.