The blistering sun had already fried the pavement making the bitumen sticky under foot in Mansfield at 8am on Saturday morning when the timer signaled the start and the first two bikes rolled away from the starter’s gate. All bikes in the event have a transponder attached with- bikes are released at 1 minute intervals for the timed event.

The Great Race is a timed navigation and reliability trial for Harley Davidson and Indian Motorcycles manufactured before 1958 held annually over two days every Australia day. It has been held every year since 1993. It is an exciting event, which rekindles the rivalry that existed between these two manufacturers in the first half of the twentieth century. Competitors compete for team scores as well as individual honours. A co-efficient applies for riders of early machines. Scoring is accumulated from a combination of navigational, average speed tests and special features which may be introduced on an annual basis. 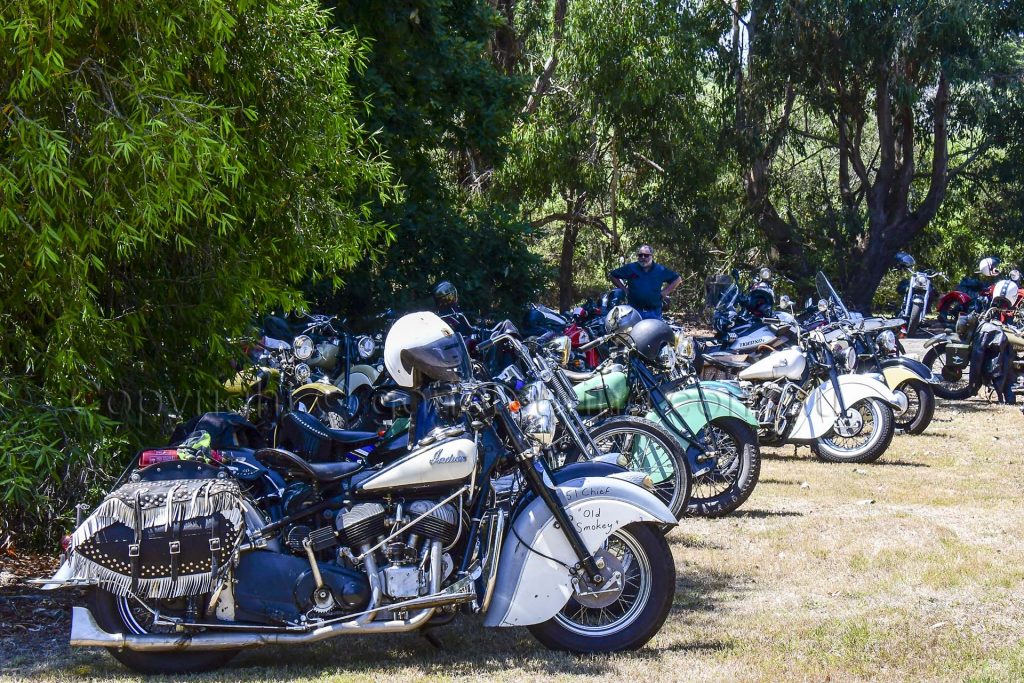 Saturday’s route took in some spectacular riding affording stunning panoramic views of the Victorian high country, Lake Eildon and Strathbogie ranges. First fuel stop was at Jameson and from here the bikes trekked south through the winding twisting turns and hills to the tiny township of Eildon and onto Alexandra where the fuel tanks were topped up once more.

From here the route took a southern alternative to Maroondah Highway where terrain flattened out and the road provided long straights with sweeping curves which allowed riders an opportunity to open their throttles wide stretching the legs of their vintage machines to the limit.

At Yarck, the route took a hard left turn at the pub which put the bikes back onto narrow country lanes with plenty of twists and turns to the lunch stop at Ruffy. Shady parking spots under trees were at a premium and riders peeled off their leathers for a quick respite from the heat.  There was even time to repair a primary drive under the shade of a tree. 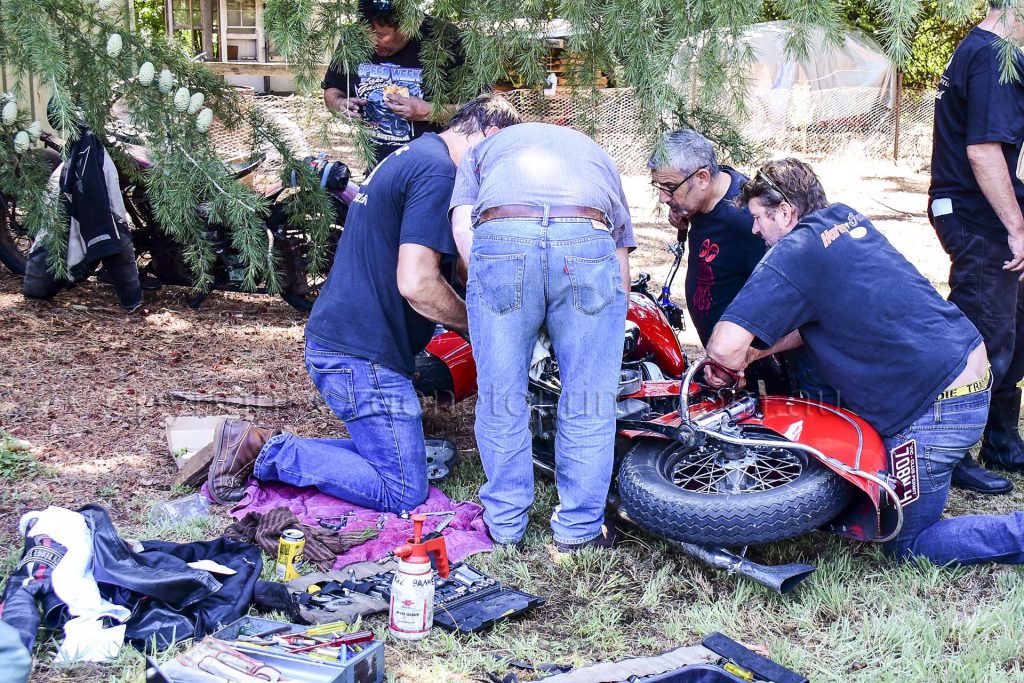 On the afternoon leg the riders continued west to Euroa for a final fuel stop before heading back east over the Strathboggie ranges to Merton were they rejoined the Maroondah Highway for the final run to the finish line at Mansfield.

Another sweltering day was forecast for Sunday. By daylight most riders were well on their way north up to Mt Buller for a car park time trial and to escape the heat for a few hours.

Back in Mansfield at mid-morning for the start of the second day’s road leg, most leather jackets had been jettisoned for a simple T-shirt. Sure enough right on 10am the clocked started riders. This leg saw the bikes trek north west up through Tolmie and over past the infamous bushranger Harry Power’s lookout down into the King Valley.  Again, another spectacular motorcycle route favored by many riders. After fueling at Whitfield riders meandered along the scenic King Valley wine route to Wangaratta Airport for lunch. After lunch the route pasted through Greta, famous as the stomping ground of Ned Kelly, and wound its way along narrow country roads to Swanpool where the riders joined the Midland highway for a 40km dash to the finish line in Mansfield.

Harley-Davidson riders rejoiced at the end of the weekend claiming victory. The previous year Indian claimed the win although Harley-Davidson almost made the hat trick with two consecutive wins prior to that.

Rain hail or shine, we’ll be back next year. (However, who could predict that Covid-19 would see the event cancelled).