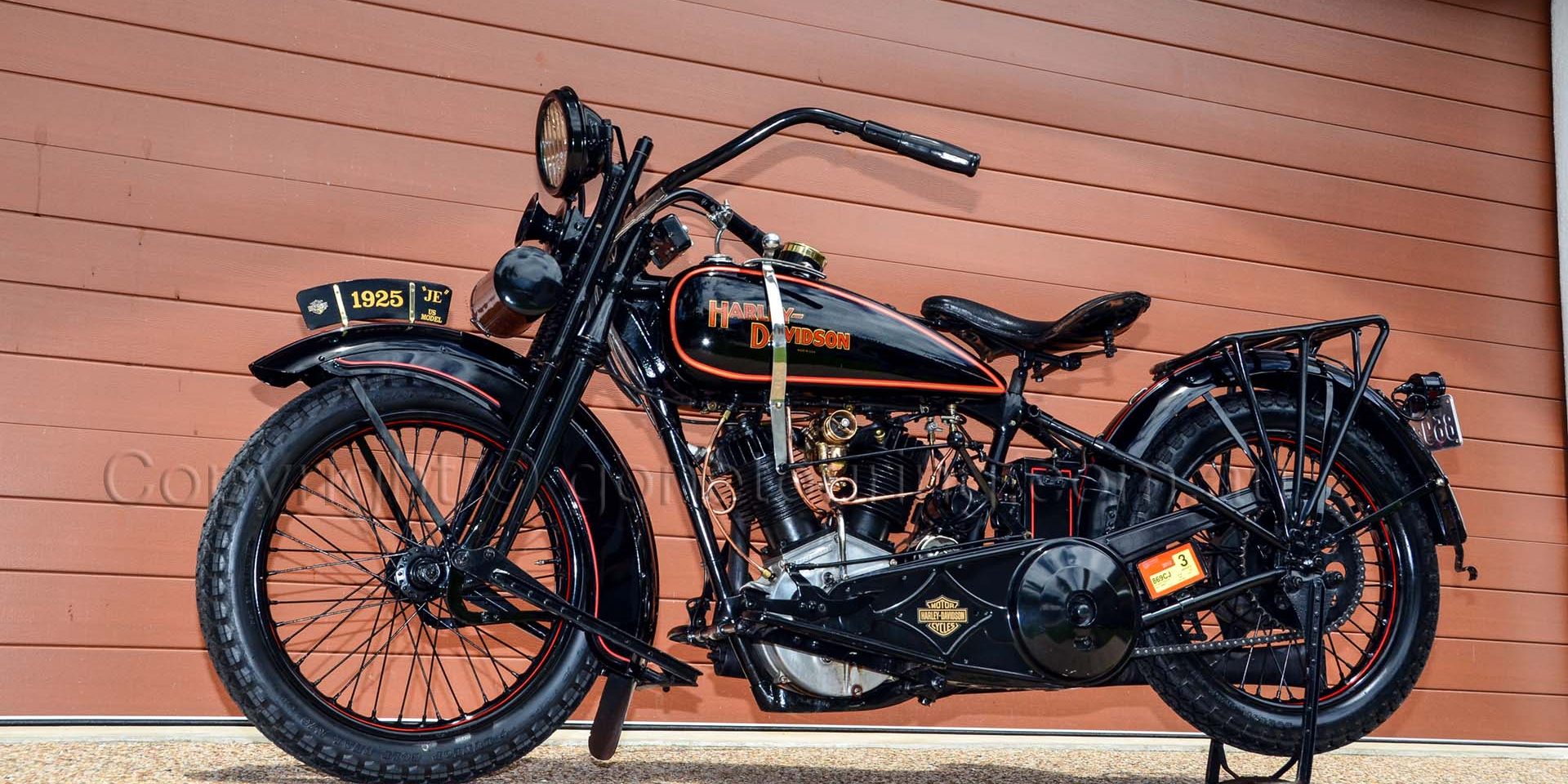 This 1925 JE Streamline Restoration for filled a life long dream for this Townsville bike enthusiast.

“The 1925 ‘Stream-Line’ Harley-Davidson Motorcycle is the finest we have ever built”, reads the headline in one advertisement. It may well have been a bold statement at the time. But one nonetheless that was well warranted according to Townsville based Maarten Zuehorn or “Zuey” as he is better known, owner of this immaculate 1925 JE Streamline Restoration. 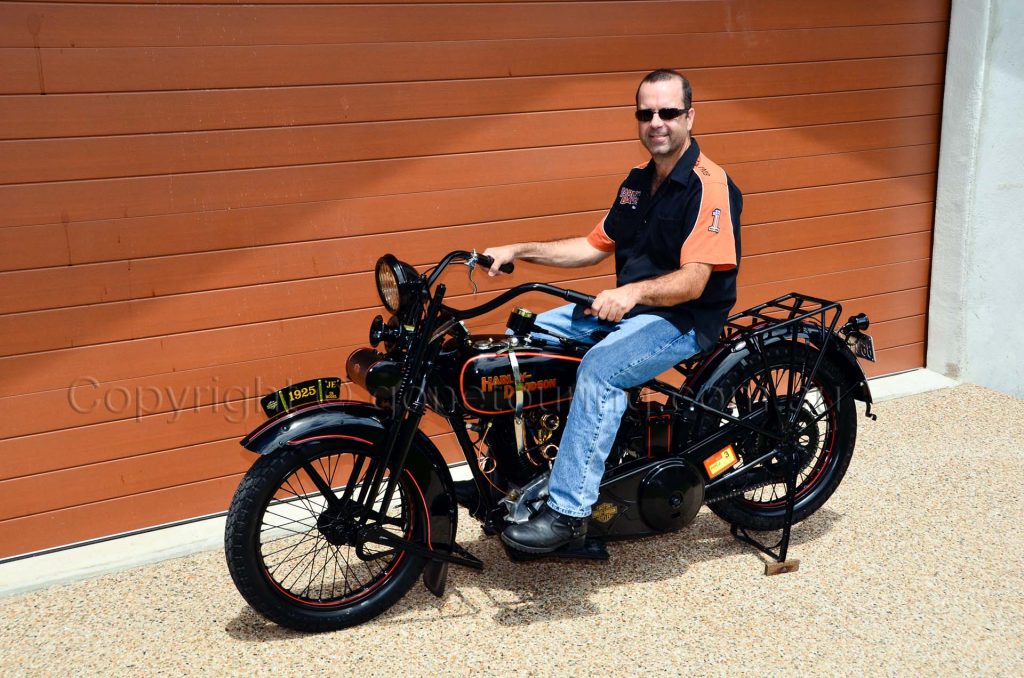 Zuey admits he has had a fascination with old bikes since he was an apprentice.

“My apprentice master had a collection of beautiful old Indian motorcycles which I use to admire,” Zuey recalled. “Then about eight years ago I was browsing through eBay when I spotted a photo of this bike and I was instantly attracted to it. It didn’t meet the reserve and was withdrawn from sale.”

A few months later I was back on eBay and discovered a 1925 brochure,” Zuey continued. “I was lucky enough to win this auction. When it arrived I read through that brochure from cover to cover and was extremely impressed with the model. I thought these bikes are a real piece of history because they were such a quantum leap forward in motorcycle design for that period.

I found an email address for the owner of the 1925 Streamline I’d seen on eBay a few years before and dropped him a line to ask if it was still for sale.”

“It was,” Zuey smiled. “The next weekend I was heading south down the Bruce Highway in my van to Sydney to pick it up.” 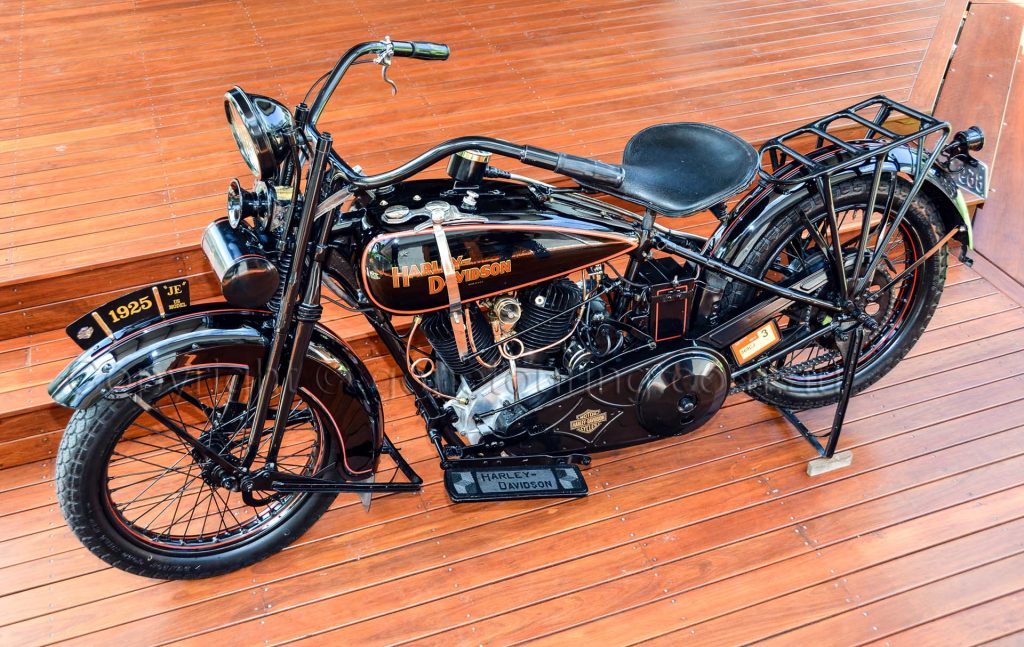 When they were released there were a reported 27 improvements to the new 1925 1000CC JE model. These included the new “J-frame” that lowered the saddle three inches compared to earlier years. H-D also moved to a larger and rounded teardrop gas tank. They added wider but smaller diameter tyres to give the 1925 models a huskier look and improve handling. Mind you colour choices still hadn’t changed since 1917 –the customer could have anything they wanted, as long as it was Olive Drab. All in all these new models looked much more modern than their predecessors.

Improvements to the frame included a loop design, which cradled the motor in the frame eliminating strains and stress to the engine. An improved method of fastening the motor to the frame meant the clamp lug position was changed making it easier to remove and install the engine. The J-frame also retained H-D’s patented cushion seat post.

The new design speedster type muffler boasted not only good looks but also added functionality and it came in a black rustproof finish. The 42-inch long pipe carries exhaust gases, “way back where it is deflected and no exhaust oil can touch and ruin the tire,” the brochure reads.

The exhaust pipe also features a foot-operated flap that allows the rider to open the pipe before the muffler for a sportier ride out of the built-up areas, it could then be easily closed once back inside the city limits.

The double-acting outside brake, fitted to the rear wheel only, consists of two separate bands hinged at the rear. The simplicity of the braking system meant they required little care if any or adjustment. 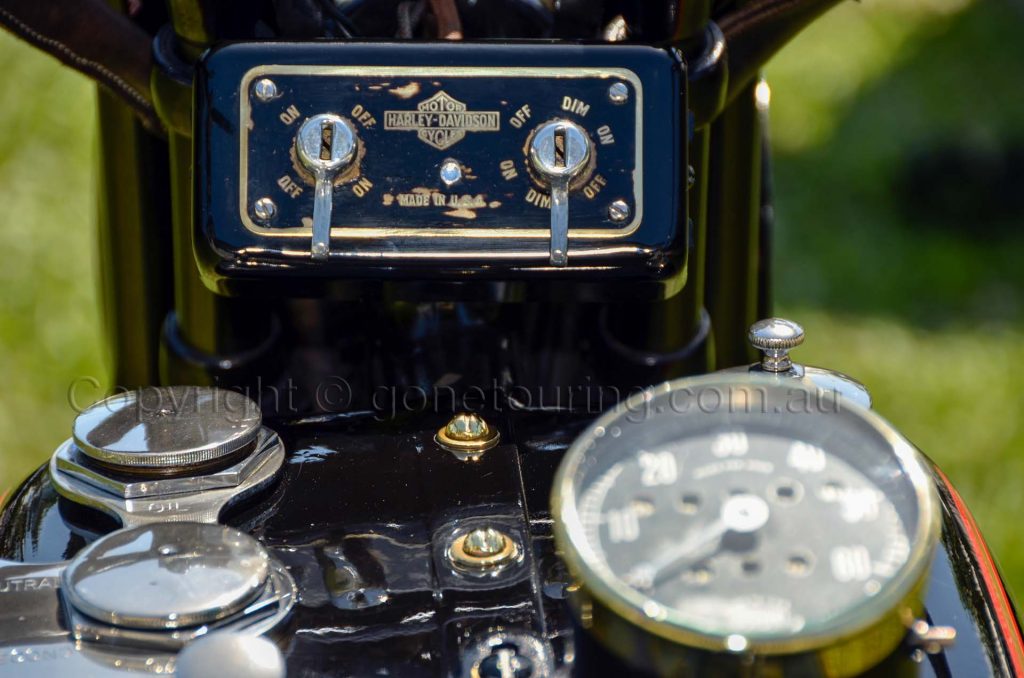 “My bike was in a pretty good mechanical condition when I purchased it,” Zuey explained. “Mind you the bike has been well used in the 87-years since it left the H-D Milwaukee factory back in 1925 as the wear is very apparent on some parts,” Zuey added.  “I have since learnt that it did spend a bit of time in a museum in Bundaberg before being purchased by the fella who gave it a 1925 JE Streamline Restorationmajor restoration then it was sold to the guy that I bought it from.”

“In the time I’ve had it, most of the work has been to bring it back to original condition,” Zuey continued. “I’ve also got the original side-car frame, however, it is missing the boat. It even has the 1/8th-inch shims to reduce the compression when the sidecar is fitted.”

“I’ve been collecting 1925 H-D brochures for years,” Zuey added.  “They actually have very detailed pictures which make recreating missing parts achievable. I’ve been able to make new brass fuel lines from these brochures to replace the rubber hoses that were on it and I’d like to build the sidecar boat myself one day.”

Zuey reckons the real fun and games began when it came time to register it. 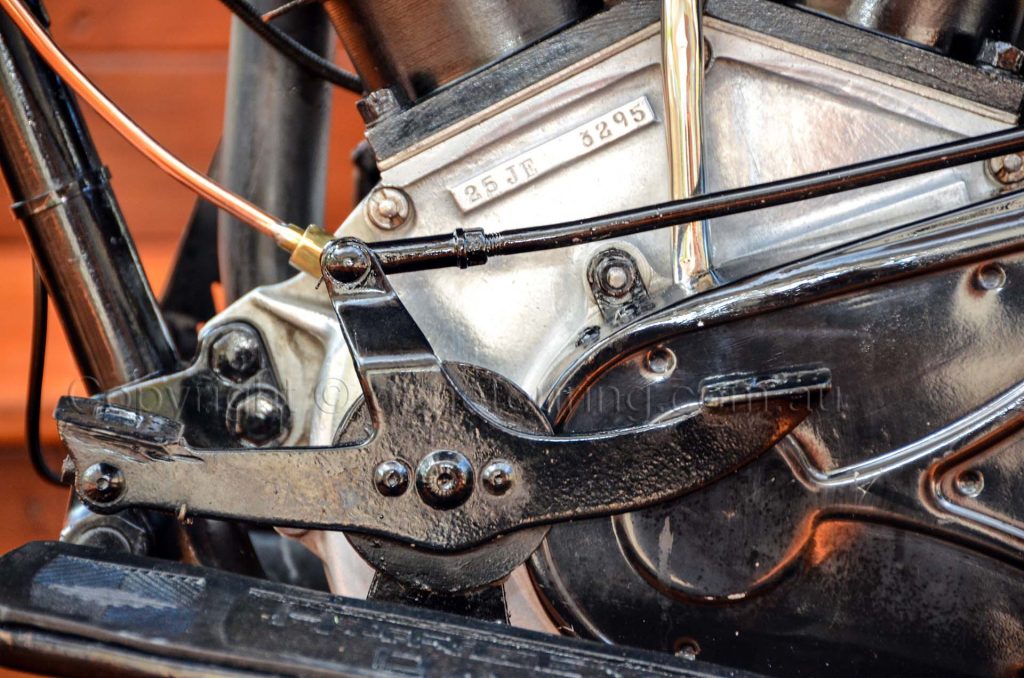 Matching Number on the JE frame

In Queensland to register a motorcycle, it must have VIN-number and that adds a degree of difficulty when it comes to these early Harleys, as they didn’t have any identifying frame numbers. To overcome this problem Zuey headed off to his local hardware store and purchased a set of stamps.

“I stamped the engine number into the frame, so now it has matching numbers,” Zuey smiled. When they (QLD Transport) typed JE Harley-Davidson in the computer there was no record of one so they had to enter in all the details of the JE model and you can imagine how long that took.

“It’s still registered to this day, but it’s the sort of bike that you inevitably push as much as you ride, he smiled.”

The service manual basically states that the 1925 ‘Stream-Line’ is equipped with a self-oiler. “It works quite well,” Zuey explained. “However if you exceed 40 mph you need to manually give it a little more oil. It’s pretty simple really, just lift the plunger, located behind the oil filer cap on the left-hand side of the tanks, and push it down to force more oil down onto the crank.

The 61 cubic-inch F-Head engine received a few upgrades for 1925 to improve reliability and longevity which included lightweight iron alloy pistons with three deep slots cut pistons rings at the top that effectively hold compression and give long wear. The sprocket side crankcase has been strengthened and a sprocket shaft and bearing fitted to increase service life. 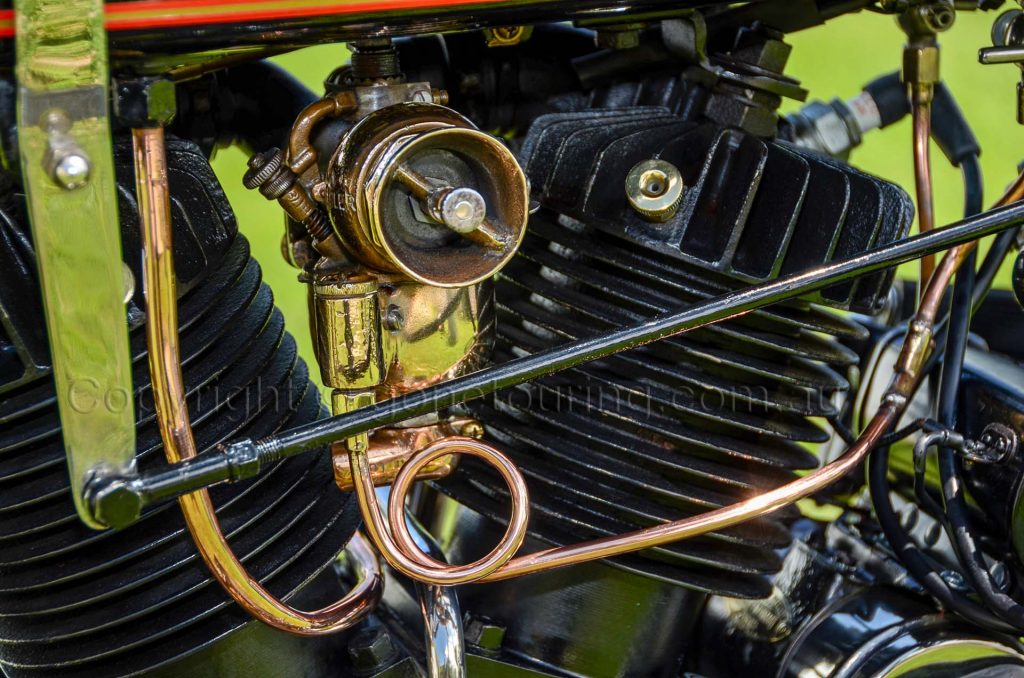 The F-Head engine retained the Schebler model-H Carburetor used on earlier models. It was also commonly fitted to most American made bikes at the time. Largely because it was one of the first so-called ‘automatic carburettors’, allowing single cable control, for motorcycles and it was an immediate success.

Both the three-speed transmission and engine used the same oil that is forced and splash fed. It is a non-circulating total loss system. “It does have a sort of sump which the rider would drain each week if the bike was ridden daily,” Zuey explained. “After draining the sump you have to push the plunger twice to circulate oil around the internals.”

The fuel cap came with a primer. This is used to fill each cylinder with a small amount of fuel to aid starting. It is simple enough to operate too. Simply raise the plunger to fill the primer with fuel, then unscrew the fuel cap and place the primer tube into the primer port on the cylinder head then push the plunger in which delivers the fuel. 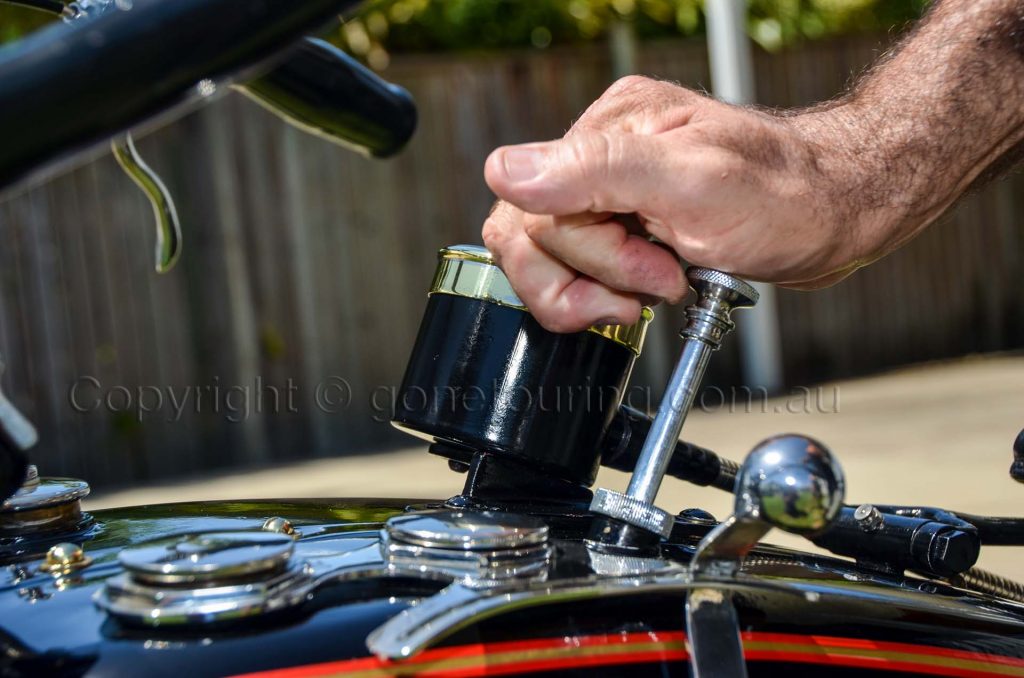 The handlebars are internally wired with the throttle on the right-hand side and distributor advance and retard on the left. “The brake lever on the right-hand side is not a factory original fitment,” Zuey pointed out. “It actually works the back brake, front brakes didn’t appear on Harleys until 1928. At this stage, I’m intending to leave it on as it works well. It is handy if you need to do a hill start. Because it has foot clutch as well as the standard foot brake. This makes it somewhat difficult to hold the bike upright when both feet are required to get it rolling. It does have a hand lever which works the clutch as well.”

The length of the rear mudguard was increased to prevent mud being thrown on the rider. It was also hinged to enable quick removal of the rear wheel.

In its day it was widely praised as the ‘most comfortable motorcycle in the world’. That was largely due to the improved cushion seat post, the front fork springs with auxiliary buffer springs, large roomy saddle and new design handlebars.

When asked what it was like to ride, Zuey smiled and said. “I think its best summed up the way it was explained to me. It’s a bit like sleeping with an 80-year-old woman… it’s do-able but it’s not the best.”

However, there is little doubt that the 1925 Stream-Line is a model of great significance in Harley-Davidson’s history. It not only ushered in greater reliability and rider comfort. It is also the first model that looked like a motorcycle rather than a large pushbike with and engine. 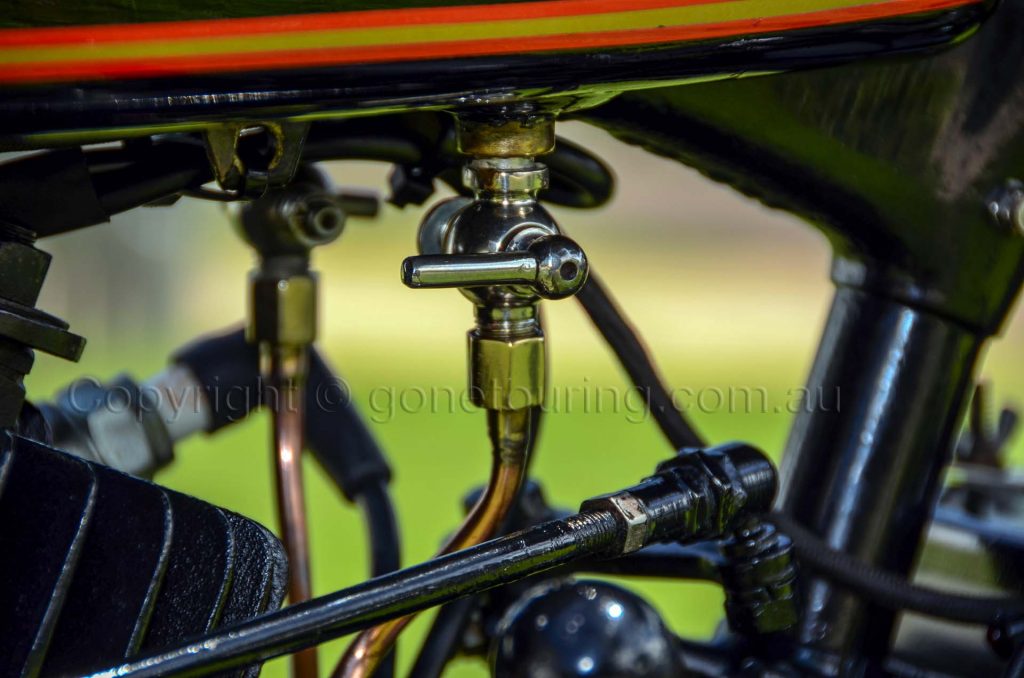