How to use a digital brake fluid tester

You are here:
Plan Your Ride 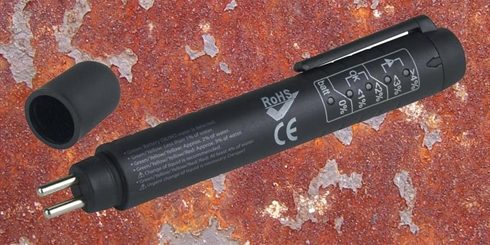 Explaining the myths of Brake Fluid.

Most automotive professionals agree that glycol-based brake fluid, (DOT 3, DOT 4, DOT 5.1) should be flushed, or changed, every 1–2 years. As a result, many manufacturers also require periodic fluid changes to ensure reliability and safety. Once installed, moisture diffuses into the fluid through brake hoses and rubber seals then, eventually, the fluid will have to be replaced when the water content becomes too high, (approximately 3 per cent).

DOT 5 is a silicone based synthetic fluid originally designed for use in military and government vehicles where regular maintenance could be problematic. Although not hygroscopic in the traditional sense, water molecules will still find their way into your hydraulics creating globules rather than being suspended as with traditional DOT 3/4 & 5.1 fluids … the end result is the same: contamination. Consquently, the United States armed forces standardised on silicone brake fluid since the 1990s. Furthermore, in cold climates silicone fluid is used extensively, particularly in Russia and Finland.

DOT 5 Silicone was never intended for serious high performance application. However Harley Davidson uses DOT 5 on many of their early model bikes, I suspect because it won’t ruin your paint if you’re all thumbs and miss the toilet a lot. Interesting aside; HD’s sporting wing; Buell, has switched to a higher performance DOT 4 in all their 2000 models. DOT 5.1, albeit confusing in designation (thank the D.O.T. for that), is effectively a lighter viscosity synthetic poly glycol fluid with DOT 4 performance parameters. It was developed for use in mechanical ABS systems that require a higher cyclic rate capability.

A small drop in brake fluid level in the master cylinder reservoir can be “topped up” but if the level consistently drops, the cause should be investigated and repaired. Brake fluid level in the master cylinder will drop as the linings (pads or shoes) wear and the calipers or wheel cylinders extend further to compensate. Overspill from pushing back pistons should be avoided, because glycol based fluid will quickly lift or strip paints and other coatings on contact (it can be removed by quickly washing with water, not wiping). Brake fluid level may also be low because of a leak, which could result in a loss of hydraulic pressure and consequently a significant loss of braking ability.

Never mix brake fluids with different DOT ratings. It must be of the same type, and at least the same rating. DOT 5.1 can replace DOT 4 and 3, DOT 4 can replace DOT 3.
Under no circumstances mix DOT 5 with any of these as mixing of glycol with silicone fluid may cause corrosion due to trapped moisture.

Brake fluid is toxic and combustible and can damage painted surfaces.

Brake fluid is subjected to very high temperatures, especially in disk brake calipers. It must have a high boiling point to avoid vaporizing in the lines. This vaporization is a problem because vapor is compressible and negates hydraulic fluid transfer of braking force.

Quality standards refer to a brake fluid’s “dry” and “wet” boiling points. Wet boiling point, which is usually much lower (although above most normal service temperatures), refers to the fluid’s boiling point after absorbing a certain amount of moisture.

This is several (single digit) percent, varying from formulation to formulation. Glycol-ether (DOT 3, 4, and 5.1) brake fluids are hygroscopic (water absorbing), which means they absorb moisture from the atmosphere under normal humidity levels. Non-hygroscopic fluids (e.g. silicone/DOT 5-based formulations), are hydrophobic, and can maintain an acceptable boiling point over the fluid’s service life, although at the cost of potential phase separation/water pooling and freezing/boiling in the system over time – the main reason single phase hygroscopic fluids are used.